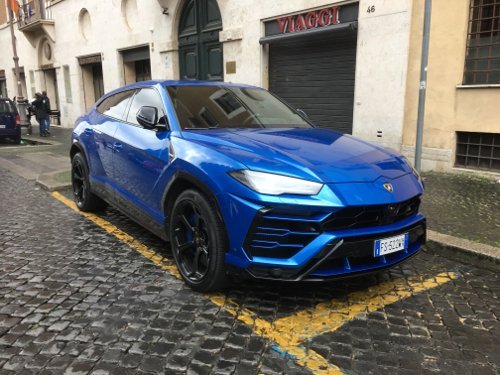 The Lamborghini Urus … I had only just read about these when I happened upon one parked on the street near the Vatican.

And let me tell you, these things look every bit a Lamborghini.  Remember the Countach days, where each next generation of the car had more angles and scoops?  Well, Lambo have short circuited all that and given it to us in Phase 1.  And as I would expect of a Lamborghini, the tyres are enormous and the rear window seem tiny.  There are, however, plenty of modern gadgets to assist with parking issues, so at least you don’t have to open a scissor door a lá the Countach, and sit on the sill to park it.

Even when it’s just sitting there, it has a menacing attitude, almost as though it’s challenging other cars to park near it … it actually looks like it uses smaller cars for fuel, and has to eat Smart cars as part of balanced diet.

I’m sure this is the view that most of us will get, as this SUV can really move.  It’ll do the 0-60 sprint in 3.5 seconds, which is only 0.1 seconds slower than what the McLaren SLR could achieve.  For me, that puts this SUV into supercar territory, and I think this deserves a new abbreviation – SSUV.  The Super Sports Utility Vehicle.

I really wish it had started when I was within earshot, as I’d love to hear how this sounds.

Powered by a modified version of the Audi 4.0 V8 engine instead of by one of Lamborghini’s own engines, the Urus also shares its platform with other SUV’s in the VW family – namely the VW Touareg, the Audi Q7, the Porsche Cayenne and the Bentley Bentayga.   Air suspension and rear wheel steering assist with the handling, while the world’s largest production carbon ceramic brakes bring the car to a halt in a hurry.   Launched in February 2018, Lamborghini targeted an initial production run of 1000 units, with a further 3500 units to be built in 2019.