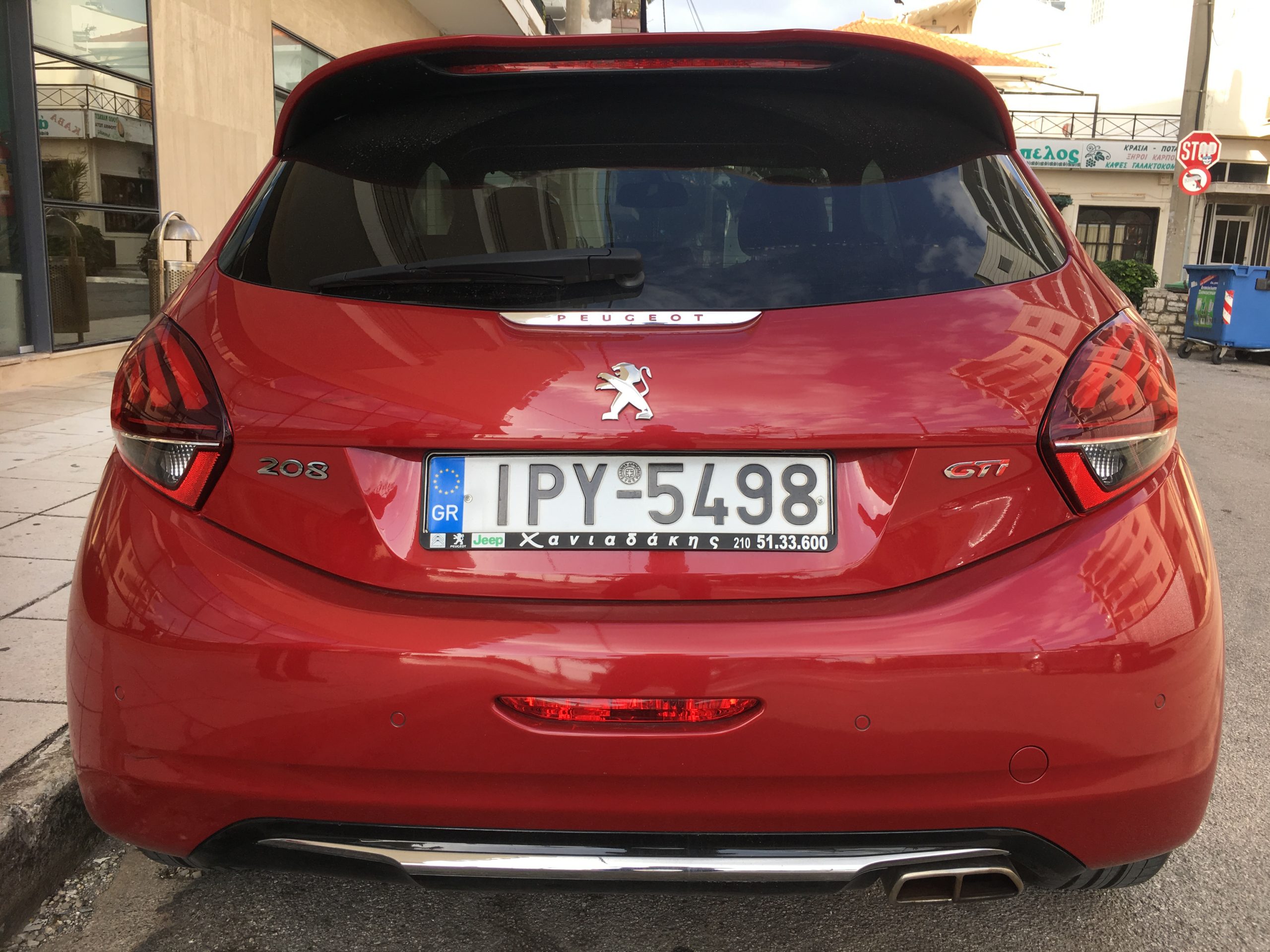 The 205 GTi is held in high regard in petrolhead circles … with good reason.  I’ve seen polls where the 205GTi is voted as the best car of the decade (CAR magazine, 1990).  It also won many world rally championship rounds, and was a common sight on roads when I was growing up.

The GTi variant, launched in 1984, was initially powered by a 1.6 engine producing 104bhp in its first guise and was joined in 1986 by a 1.9 engined variant producing 126bhp.  It also has the distinction of never undergoing a facelift, speaking volumes for just how pleasing the Pinanfarina design was.

And here, on the street in Greece, I see a 208 GTi at rest.  My initial reaction is one of excitement as I’m not long after reviewing the diesel version of the 208, and would really love a go in this hotter version.

Launched in 2012, the 208 GTi is fitted with a 1.6 litre four cylinder in line turbo powerplant producing just under 200bhp and has a proper stick shift with six cogs. This engine, codenamed Prince, was a joint development between the PSA Group (Peugeot and Citroen) and BMW, so benefits from the BMW Vanos variable valve timing system.  The variant of this engine used in version two of the 208 GTi won its eighth consecutive International Engine of the Year Award in the 1.4 to 1.8-litre category in 2014, so that was obviously a linkup that worked!  Note that a similar variant of this engine is utilised in the Mini Cooper John Cooper Works GP, also a pocket rocket.

Did I say version two?  What was version two?  PeugeotSport decided that version one with just under 200bhp was not a good enough successor to the legendary 205, so they took the 30th anniversary edition of version one and used that as a basis for version two.  In this guise, we have been given 208bhp (a nice touch, I thought) and better suspension (alongside the standard model’s facelift).  Hmm … already the story for this car is wrong, as the 205 was spot on when initially released.  I wish manufacturers would let the design and planning for the higher performance variants be handled by the in-house petrolheads and not the bean counters …

And the story gets worse – in 2019, Peugeot dropped this model from their lineup … maybe they’ll bring it back as the second generation of the 208 ramps up sales.  Time will tell.

So what we have here, in the middle of downtown Kalamata in Greece, is a pretty rare beast.  It’s a version two 208 GTi in a nice red, with the proper trimmings and a cracking engine.  I’d love to get behind the wheel of this, especially since I drove the torquey diesel variant of the 208 a while ago and liked the driving dynamics.  I’d also love to see if this drives anywhere near as the 208 T16 variant that a certain Sebastien Loeb rocketed up the Pikes Peak hill climb course in 2013, smashing the previous record of 9:46.164 with a new record time of 8:13.878.  The same car also won the hillclimbing race at the Goodwood Festival of Speed in June 2014.  I’m a huge fan of hillclimbing, so I’d love to give this a go!

This car strikes me as something designed to attract petrolheads – reasonably under the radar but with one the best engines on the market.  Make sure to give a thumbs up to any you see on the road – you know there’s a car enthusiast behind the wheel.