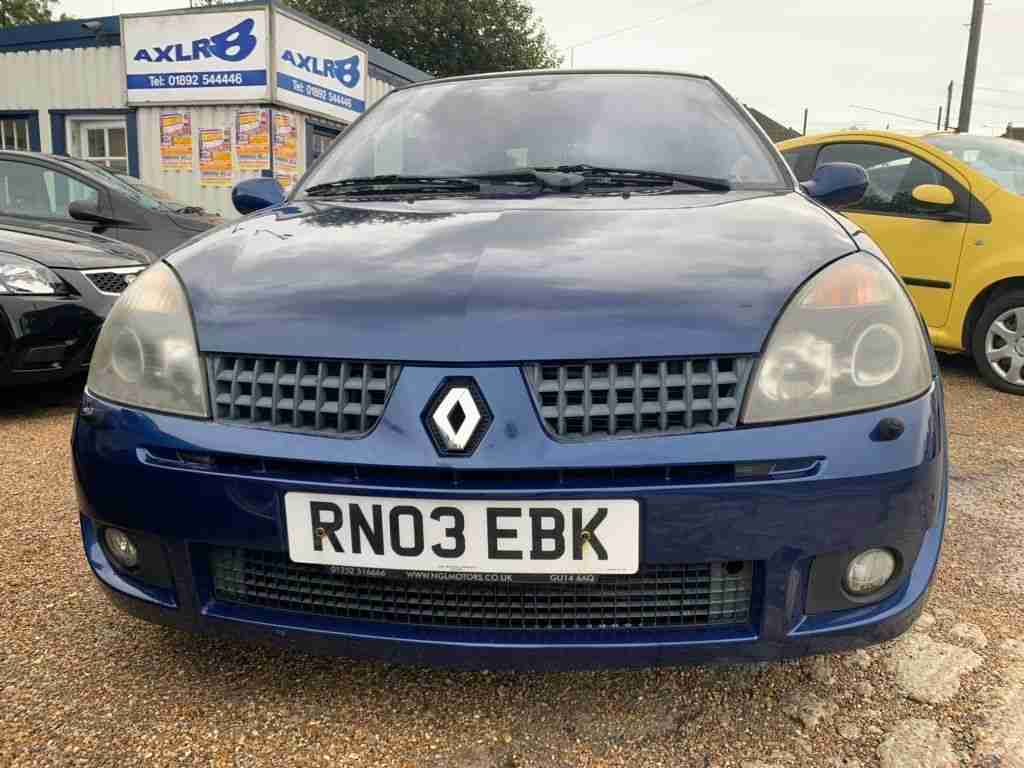 The Renault Clio 172 was the third hot Clio that the petrolheads in RenaultSport produced.  The Clio 16v set the standard and the Clio WIlliams raised that standard so expectations were high for this model launched in 1999.

Based on the first generation of the Clio, the 172 was a three door variant only that had side skirts and different bumpers that matched the wider wheel arches to accommodate the OZ racing wheels.  All these aerodynamic aids were accompanied by mechanical improvements too – a 2.0 litre 16v F4R730 engine with variable valve timing controlled by a dephaser attached to the intake camshaft pulley was dropped in.  This engine had been handed to Mecachrome for tuning and was matched to a 5 speed JC5-089 manual transmission.

Finally, the interior was also improved over the standard Clio with the addition of air conditioning and alcantara seats with leather edging.

All well and good, but the one I want was launched in 2001.  The Clio II improved both the interior and the exterior of the small hatchback, so the 172 model had to adopt the same improvements – new bumpers, headlights, bonnet and boot lid on the exterior while the interior had new seats.

This Clio 172 Phase 2 offered a better level of comfort for passengers through the inclusion of a 6 CD changer and automatic climate control.  The new seats featured side impact airbags but were still half alcantara and half leather items.  Drivers aids on offer included automatic Xenon lights and automatic wipers and 16″ wheels (Renault’s own design this time).

Mechanically, the F4R736 engine in this variant gained a square airbox and a new cylinder head matched with smaller exhaust ports.  The original gearbox was upgraded to a JC5-129 variant which countered the heavier weight of the facelifted model with a shorter final drive.  In addition an electric throttle was adopted, which meant a new intake manifold was designed as the idle control valve of the original car was no longer needed.

There were limited edition variants over the lifetime of this RenaultSport Clio Phase 2.  The 172 Cup weighed quite a lot less than the 172 model through the exclusion of air condition, xenon lamps, headlamp washers, sound deadening and the abs braking system.  Definitely aimed at the track, this car could supposedly hit the 60mph figure in 6.2 seconds.

The Clio 182 came after the 2004 refresh of the base Clio.  This variant gained Cruise Control and ESP, a poorly regarded satnav system and new wheels.  Mechanically, the engine was now designated F4R738 to account for a new catalytic converter and a different oil breather.  This resulted in a new intake manifold and a higher power output of 182bhp.  These cars can be easily spotted by the dual exhausts exiting in the middle of the rear of the car – a setup which ran through the spare wheel well thereby removing the spare wheel!

The 182 Cup version removed the xenon lamps and washers, climate control and auto wipers.  The interior gained cloth seats, the carpet and headlining were thinner, map reading lights vanished and the dual horn setup was downgraded to a single item.  All sound deadening was also removed – despite all this, it still weighed more than the 172 Cup so this was not the model to have.

Renault recognised the poor sales for the 182 Cup and countered with a limited edition 500-model run of the 182 Trophy.  This model offered the wheels from the 172 Cup, the rear spoiler from the Clio V6, Recaro racing seats and was only offered in what was referred to as Capsicum Red paint.  The renowned handling of this car was thanks to the Sachs Remote-Reservior dampers.  This car was tested by Evo Magazine in 2005 where the test driver reports pulling away from the Lamborghini Gallardo around the bends thanks to its incredible handling.

Personally I would like a Phase 2 Clio 172 – the cup variants are too bare in their comforts for my liking, and apparently the 182 Trophy dampers are expensive to maintain.