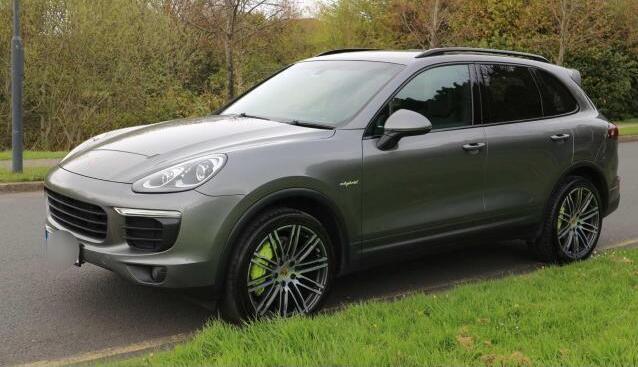 I’m a big fan of the Audi S range of models.  Yes, I know you’re here to read about a Porsche Cayenne, not an Audi, but check out this nugget of information.  The Porsche Cayenne S E-Hybrid that we are looking at here is a Porsche SUV that has taken the 328bhp supercharged engine from the Audi S4 and bolted an electric motor aboard to give us a total power output quoted at 410bhp (with 435lb/ft of torque to match).

I have to admit disliking the original Porsche Cayenne design – I thought it too boxy for a start.  This 2015 model I’m looking at here is the second generation of the Cayenne model, which launched in 2011 and brought the following updates

What attracts me to this car

Space, comfort, the Porsche badge and a desire to have decent build quality are top of the list here.  I also like the idea of going hybrid next time but I don’t want a pure hybrid motor like the Toyota Prius that actually stops working if the  battery goes flat.

This particular hybrid will get to motorway speeds – 78mph – without needing the petrol motor.  However, unless you live on the motorway this might be tricky to achieve as the electric-only range is limited to 11 miles.  But I really like the regenerative braking system here – it has been reported many times that you may never need to plug this car in due to the battery being charged when you use the brakes.  That’s a great idea.

I also like the many driving modes, and with a supercharged V6 engine in the mix I’m delighted you can select a mode for max power delivery alongside a pure electric mode.  This gives me the best of both worlds depending on the mood and situation.  I’ve noticed too that the torque delivery and acceleration are matched to the XF-S that I am thinking of replacing with this, so I get better than the twin-turbo diesel torque delivery from a supercharged petrol hybrid.  Also, the car tax comes in at €170 annually instead of €590 – all this sounds very tempting.

(I am aware there is a Cayenne diesel that would be an interesting alternative for this hybrid offering, but I already have a twin turbo diesel that drives like a sports car when I want and a luxobarge when I don’t, so the Cayenne diesel doesn’t bring anything to the table I want.)

What to look out for on the Cayenne (second gen)

As I suggested earlier, I’m looking at this car due to its exceptional build quality.  This is reinforced by the fact that there is one recall relating to a clip breaking loose in the pedal box.  There is only one other issue around the rear light lenses decomposing, as the report put it, but that actually reads like a poorly built section of the car rather than a fault endemic to the entire range.

However, as per usual there are other things to check