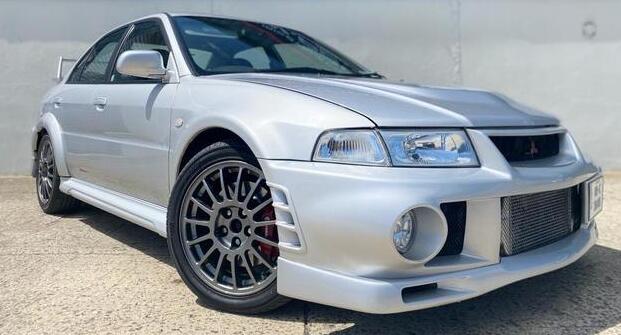 Every so often a car is launched that will forever live in petrolhead lore.  Cars like the Mercedes-McLaren SLR and the Subaru WRX.  And here we have another one of these, the Lancer Evolution from Mitsubishi.  There were many variants over the years, but my favourite has always been the Evo 6.

Launched in January 1999, this car was aimed squarely at winning the World Rally Championship and in fact it was WRC regulation changes that necessitated the update to the Evo 5.  New aerodynamic aids such as the distinctive double adjustable rear spoilers helped the car to stand out (and handle better), while moving the front licence plate to the side allowed for a big air intake to be slapped in the middle of the front bumper, helping both with cooling the powerplant and assisting with aero downforce.  Also as an aid towards cooling, the huge foglights that were a feature of the Evo 5 were replaced with smaller units and moved to the extreme edges of the car.

The theme of this variant was keeping the engine cool in the Evo 6 – to further achieve this along with the internal changes to the engine mechanics, Mitsubishi added an air to oil cooler, a larger intercooler, a high volume oil cooler and created additional channels around the pistons to keep them cool too.  All this helped the 2.0 litre turbocharged engine maintain high power delivery.  Reliability and durability are important in rally cars that operate at the extreme…

Obviously, if the car goes faster, then it needs to have improved handling and a better braking system.  Brembo delivered more rigidity in the calipers while the front suspension was redesigned to offer a lower roll centre and the rear suspension offered a longer rebound stroke.

Having won four WRC world championships for Mitsubishi and in recognition of both his guidance in developing the Evolution Lancer models and his fame as an amazing driver, Mitsubishi created a Tommi Makinen Special Edition that was launched in 2000.  These versions included different paint schemes, a titanium turbine, a different front bumper, different wheels and Recaro seats.  This is the version I’d love to have!

What to look out for on a Mitsubishi Evo VI