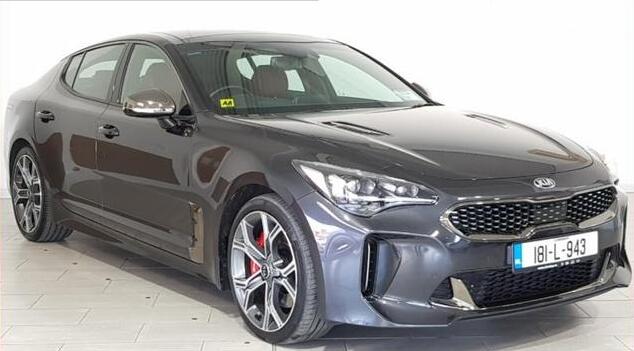 I’m sure you’ve heard of Albert Biemann … but for those who haven’t, he has the pedigree of being a previous man-in-charge at BMW’s M division.  So he knows a thing or two about making slow cars go faster.  And be good to drive.  And all that.

So when I read that Mr Biermann was now working for Kia and had been responsible for the development of the Kia Stinger GT, I got interested.

Debuting at the 2011 Frankfurt Motor Show where I’m sure Mr Biermann felt on home ground, the Stinger GT launched on to the market  in 2017 after a few trips around the Motor Show Circuit.  While the base model is powered by a 2.0 litre inline four cylinder turbo powerplant, the one we’re interested in, the GT version, is powered by a 3.3 litre V6 twin turbo powerplant that delivers 365bhp (272kW) and 510nM (376 lb-ft) of torque,  Oh, and it drives the proper (rear) wheels through an eight speed auto box with tiptronic shift and five different driving modes.  This really just gets better and better!

Braking is provided by 4-piston front and 2-piston rear Brembo calipers while the handling is cleverly set up – the car has a limited slip differential with adaptive damping controlled via the 5 driving modes – Smart, Eco, Comfort, Sport and Custom, while the platform is a shortened version of that from the Hyundai Genesis.

Custom mode allows the driver to set up different engine and transmission characteristics, coupled with different steering responses and adaptive damping rates.  I do have a gripe though – fake engine noise is piped into the cabin.  I wish they just relied on the natural engine sound.

And just to reinforce how much of a drivers car this is, I have two interesting facts to share.

I definitely want to drive one of these, but I doubt I’d buy one as I suspect the depreciation is astronomic.  Maybe when it’s 5 years old …