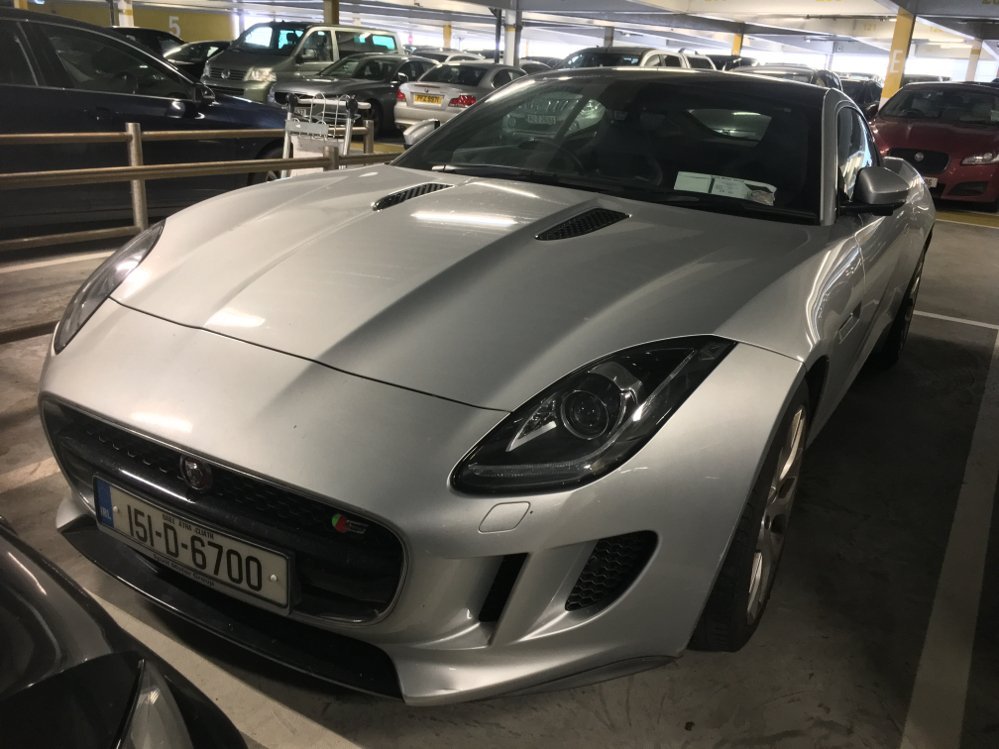 Jaguar’s alphabet seems to have started at ‘C’.  They gave us some amazing automobiles with the C-Type, D-Type and E-Type.  How does the F-Type hold up to such a strong tradition of intoxicating machinery?

Well, from what I see in this car park, the F-Type holds up pretty well commercially.  There are 3 different F-Types all within close proximity to each other, and they stand out a mile from the usual selection of euro-boxes at rest here.  The rear lines really draw the eye, with the sweeping rear window sharply ending at the boot lid.  The rear exhausts look as though they could double up as flamethrowers, while the rear tyres are so wide they almost meet in the middle of the car.

The two models in the above pic are a P300 and an S – you can see the difference in the rear bumper in case the models are de-badged.  The F-Type S, first announced in 2013, has the same engine as the original 3.0 litre supercharged V6 base model but with an uprated power output of 375 bhp instead of 300 bhp.  The P300 is the latest incarnation of the F-Type – this particular variant I am looking at is the R-Dynamic trim level – and it has a 2.0 litre inline 4 engine producing 296 bhp.  Better for the environment, I guess!

Launched in 2013, the original F-Type had Jaguar’s V6 supercharged 3.0 engine punching out 340bhp.  Or you could have the S version, seen here in silver, with 380bhp and reducing the 0-60 sprint from 5.1 to 4.8 seconds.  This rear wheel drive coupe had the engine in the front and was available with a tiptronic 8 speed automatic.

2015 introduced a 6 speed self-shifter option on the V6 models, while in 2018 Jaguar produced their first four cylinder sport car with the introduction of the 2.0 litre turbocharged engine, seen here in grey.  The smaller engined variant is no slouch, with the 0-60 sprint completed in 5.7 seconds and achieving a terminal velocity of 250 km/h.