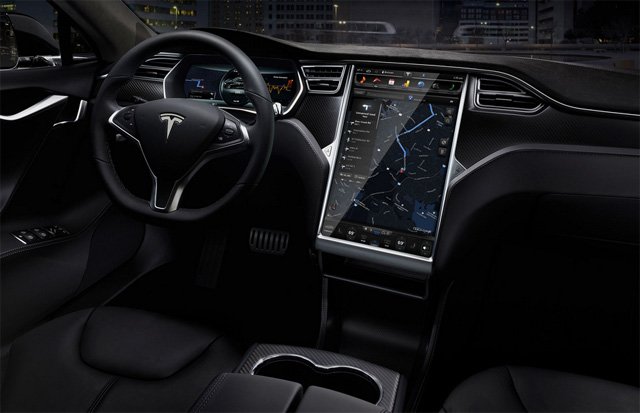 As if car badging and spec labels weren’t confusing enough, Tesla had to take a standard term and re-use it for something else.  Their P70D model is not, as you would expect from the D, a diesel powered motor, but in this case the D stands for Dual Motor.  Why didn’t you call it a DM?   Thanks a bunch, Elon! 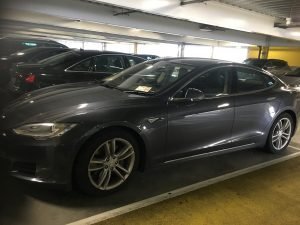 Anyway, this particular model of Tesla (Model S P70D) looks pretty much the same as every other car on the Tesla list (and in fact it looks very like every other mid-range hatchback too).  I’m not blown away by the Tesla bodywork, if I’m honest.  For the prices these things sell at, I would be upset if I confused it with a 25k Ford Mondeo, for example!

Really makes an impact when it drives past you, though, as the complete silence as it drives by is really off-putting.  I was in a dealership recently looking at my next potential purchase, but to organise a test drive they had to move a Tesla out of the way.  It was strange watching the dealer hop in, start the Tesla (no noise!), and then driving it out of the showroom – the only noise was the tyre squeaking on the tile floor.  It just seemed wrong!

There is a question over Tesla build quality too.  A particular car magazine has documented issues with door handles and paint quality, and other owners on the internet report various interior issues over the life of their ownership.  So, if you are going to invest in a Tesla Model S on the used market, I suggest you thoroughly check it over before purchase.

Now, despite the negative tone I’ve taken thus far, I actually really like the idea of the Tesla P70.  Fast, spacious and comfortable (when it stays together), this is definitely a huge leap forward in car technology.  I like the 385km (280 miles) range they can cover on a single charge, and the running costs cannot be ignored.  When the infrastructure around electric cars matures and we can get a full electric charge in the same amount of time that it takes to fill a fuel tank, then we will have taken a leap forward in car ownership for sure.

The Model S was initially launched in 2013, in P60 guise.  The P70D that we are discussing here came along in April 2015, giving us all wheel drive from a dual motor setup punching out 70kw of battery power and 175kw from the motors on the axles and an improved range.  Elon has also seen fit to grant us an autonomous driving setup, although personally I would still be paying attention at the wheel, even in autonomous mode.

If you can locate a rapid charge station, this machine will recharge enough in 31 minutes to offer a driving range of 283 km.  The much discussed ludicrous mode for the later versions of the Model S is not present in this incarnation, so bear that in mind if you are buying one on the used market.  Having said that, the actual 0-100kmh time of 5.4 seconds means this version will still blow the doors off most other machinery on the road!