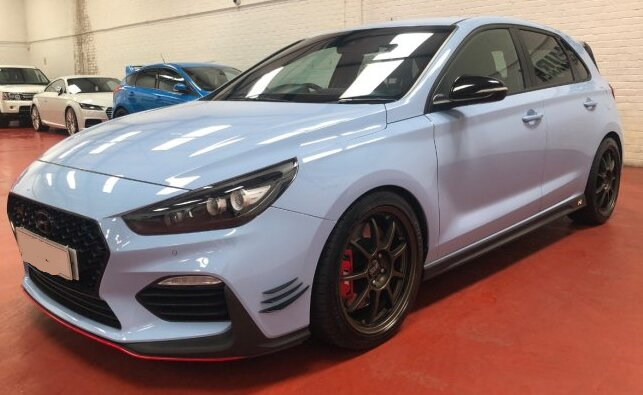 In 2013, Hyundai decided they needed a performance division to rival BMW’s Motorsport M division, Renault’s RenautSport RS division and Mercedes AMG arm.  They unveiled their ‘N’ logo alongside the 2014 WRC car and hired Alfred Biermann to eventually run the Hyundai High Performance Vehicle & Motorsport Division  (Yes, that Alfred Biermann who was involved in BMW’s M division and gave us the Stinger GT too).

In 2017, Hyundai then announced their marvelous i30N that has taken the hot hatch world by storm.  This was based on the third generation of the Hyundai i30 which had been launched the previous year at the Paris Motor Show.  The third generation redesigned the front end to give us a new grille featuring better headlights that also incorporate LED DRLs, while the interior is much better put together and actually has a real feeling of quality exuding from it – helped by more room for the occupants and addition of the latest technology.

With such a good basis, a rival to the Golf GTI made sense.  The i30N, refined on the Nurburgring (is that why they chose ‘N’ …?) is powered by a 2.0 litre inline 4 cylinder turbocharged engine that punches out 271bhp – compare that to the 2017 Golf GTi which has 220bhp and you can see why this made an impression. In fact, it feels more relevant to compare this to the 2017 Porsche Boxster that has 300bhp … and that’s quite a comparison.

Not only does it have a similar power figure to the Porsche, the i30N is also quite a driving machine.  Although it was refined on the Nordschleiffe, it was not set up on that track to set records but instead was setup to be a great driving and handling machine.

And in case the owner reckons they are more knowledgable than the Hyundai engineers, they can set up the car to drive any way they like.  There are many ways to configure the chassis and engine within the Drive Mode menu option, and it would take a few weeks to get through them all!  I like the idea, though, that once you get the perfect setup from all the various options, you can set the Chequered Flag button to implement these settings at one touch.

Note to self – that”s the first thing to address if I ever buy one of these.  Potential owners may not realise the settings already programmed into the Chequered Flag button may be altered….

It should be pointed out that the figures I’ve quoted above are for the Performance Pack option that Hyundai add to the  i30N.  The Performance Pack adds such things as more options in the Custom driving mode, an extra 25bhp, 19″ wheels, an electronic LSD and an active exhaust while electric memory front seats appear in the interior.  Definitely the one to have …