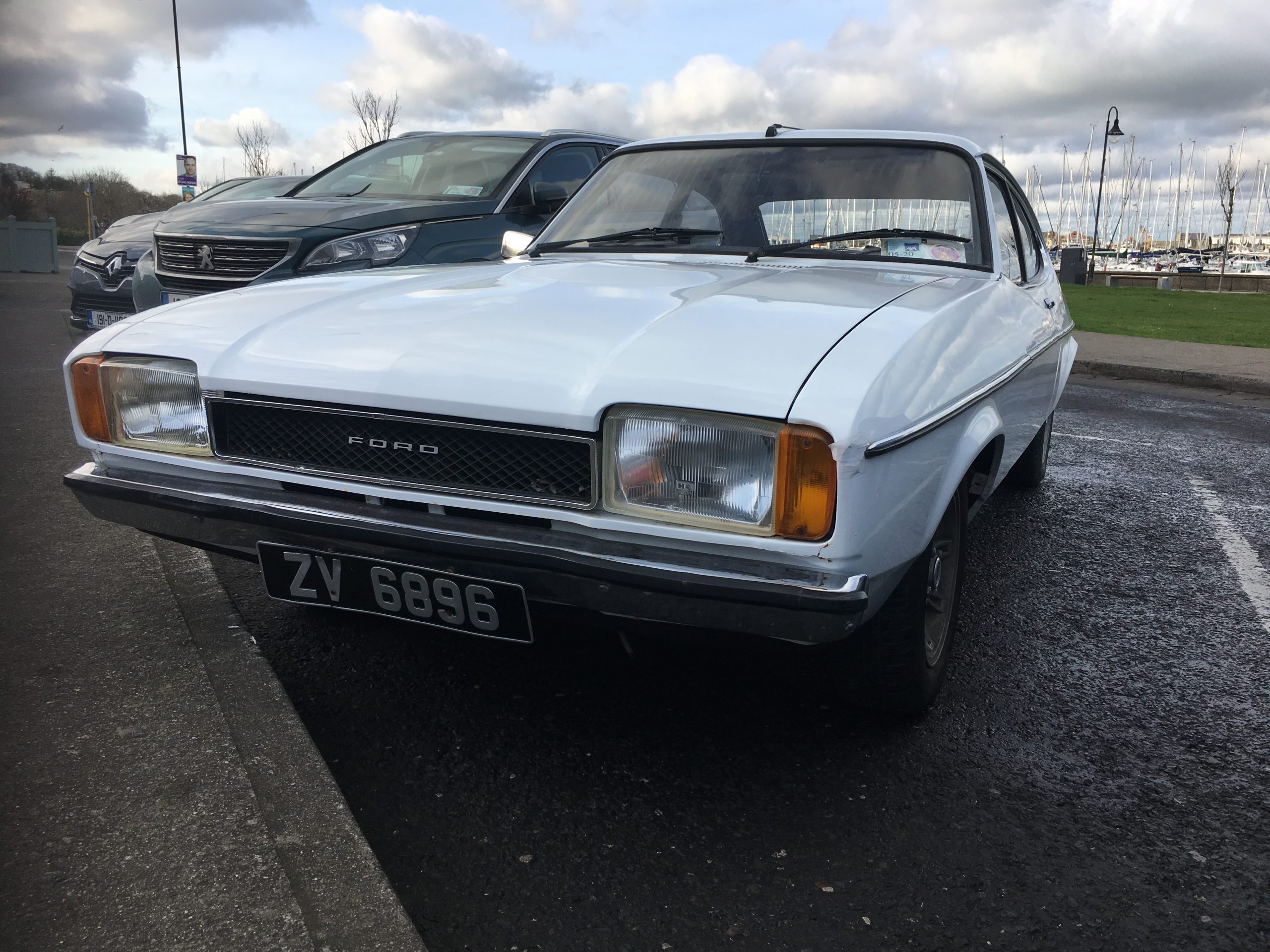 Car designs today, by and large, are all very similar.  While I currently drive an XF from 2014 that I think looks fantastic, in reality it isn’t all that different from other 5 door large hatchbacks from Kia (Stinger), Ford (Mondeo), BMW (4 series GranCoupe), and so on.  If I gave you a series of pictures of modern cars with the badges taken off and asked you to identify them, I bet not everyone would get them right .. (I did do that , although I made it a bit easier with multiple choice answers.  Click here for the quiz.)

It is, therefore, very refreshing when I encounter something in a car park that stands out.  And as I walk up to this 1977 Ford Capri, I can’t help but imagine what sort of impact this car had when the Mk1 Capri was first launched to the mainstream market in the 1960s, with this MkII following in 1974.

This particular variant is a MkII 1.6 GL from 1976.  And it’s in good nick, which is why I wandered over as the driver got out and had a long discussion with him.  He turned out to be a real petrolhead, with a few motors in his garage back home.  (When asked, he confessed that his favourite is an MGB in racing green).

Ford announced the MkII Capri in February 1974, mainly as a reaction to the oil crisis that woke everybody up in 1973.  The MkII had large boots to fill, as the Mk1 sold over 1.2 million units.  Ford realised this new version had to appeal to the mass market and decided that the best way to do this was to deal with everyday driving issues – fuel economy, boot space, accessibility and interior space.  This prompted the very first hatchback to be sold by Ford (at a time when hatchbacks were becoming very commonplace).  As it happens, I got to look at this hatchback solution as the owner of this model wanted to get his jacket from the boot – and it would still hold up in today’s world.  The loading lip is a bit high, but the space in the boot is impressive and the headroom for rear seat passengers is not impacted by the hatchback solution.

The interior of this car must be made from indestructium too, as I’ve owned cars 40 years younger that haven’t survived the test of time as well as this has.  Lots of legroom and headroom, a nice driving position and an attractive stance as it poses in the car park – I wonder what I’ll be saying that about in the future from the current range of 3 box clones on sale today.

The other aspect of this hatchback that stands out is visibility through the rear window – I am not a fan of the latest design trend that has tiny rear windows in modern hatchbacks.  This window is huge.  Why are we not doing that anymore?  Maybe we wouldn’t need reverse cameras and parking sensors if car designs were just a bit more sensible in terms of providing rear windows we can actually see out of…

Coupled with a more modern dashboard, smaller steering wheel and a 4 speed manual or 3 speed automatic transmission, unfortunately the MkII variant of the Capri was just not as successful as Mk1.  This prompted Ford to launch the MkIII in 1978 which is probably the version most people remember, with its dual round headlights and better driving dynamics.  This car first came to my attention in the 1970s The Professionals tv show, and I have to admit always admiring the way Bodie drove his 3.0S as though he’d stolen it.  I’ve promised myself a drive in a MkIII 3.0S, but that dream remains unfulfilled to this day.

If I’m honest, I wouldn’t want a MkII Capri in my collection.  It just doesn’t grab my attention like the MkIII.  But kudos are due to owner of this particular model.  While he claimed it wasn’t perfect, it looks pretty good to me for a car that is 43 years old.  I’ve friends younger than this Capri who are in worse condition … !