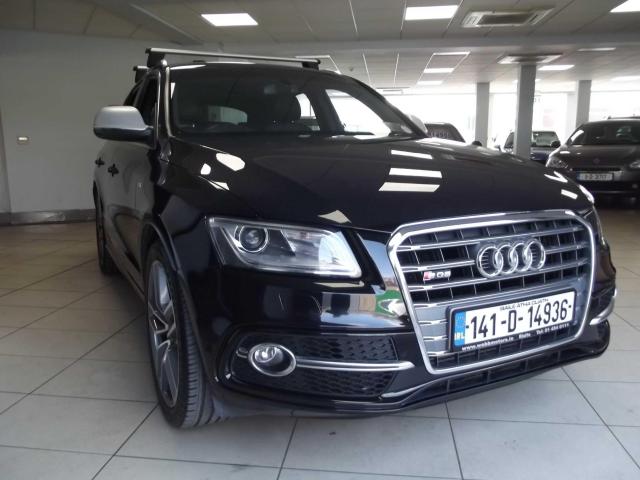 I have to be honest here – I had never heard of an Audi SQ5 until one blew my doors off on a motorway during a trip to the UK.  Stopping into the next service area, it happened that the car was parked in there and I got a chance to have a look.

Launched in 2013, the SQ5 was Audi’s first adoption of diesel technology in a performance variant … a step which ultimately led to a Le Mans winning diesel LMP1 race car.  The 3.0 litre V6 twin turbo-diesel engine was matched to an 8 speed tiptronic shifter and offered 313bhp.  However, the highlight of this engine is the torque delivery curve that gives 650 nM of torque at 1,450 rpm.  That sounds right up my street and is the reason I prefer turbo diesel technology.

Of course, being a fast Audi, the SQ5 features a permanent four wheel drive setup.  This version of the Quattro system features torque vectoring so should have fantastic traction no matter what the surface.  A personal note here though – I’ve had three fast Audis that all featured different versions of the Quattro system – the S3 and the S8 both suffered understeer but the TT actually stuck to the road and cornered like it was on rails.  I don’t know what to expect from Quattro systems anymore as they all seem to behave differently and I suspect this is because of the mass and inertia of whatever car they are powering rather than the abilities of the Quattro system.

Other differences over the standard Q5 models are sports suspension that lower the body by 30mm, 20 inch wheels that can optionally be upgraded to 21 inches, black ‘S’ badged front calipers, an optional Audi Drive Select menu system in the MMI and upgraded electric sports seats featuring leather and alcantara.

The SQ5 can complete the 60mph sprint in 5.1 seconds and is limited to a 155mph max speed.  This model proved so successful that it was used as the basis for the Porsche Macan.

What to look out for on an Audi SQ5