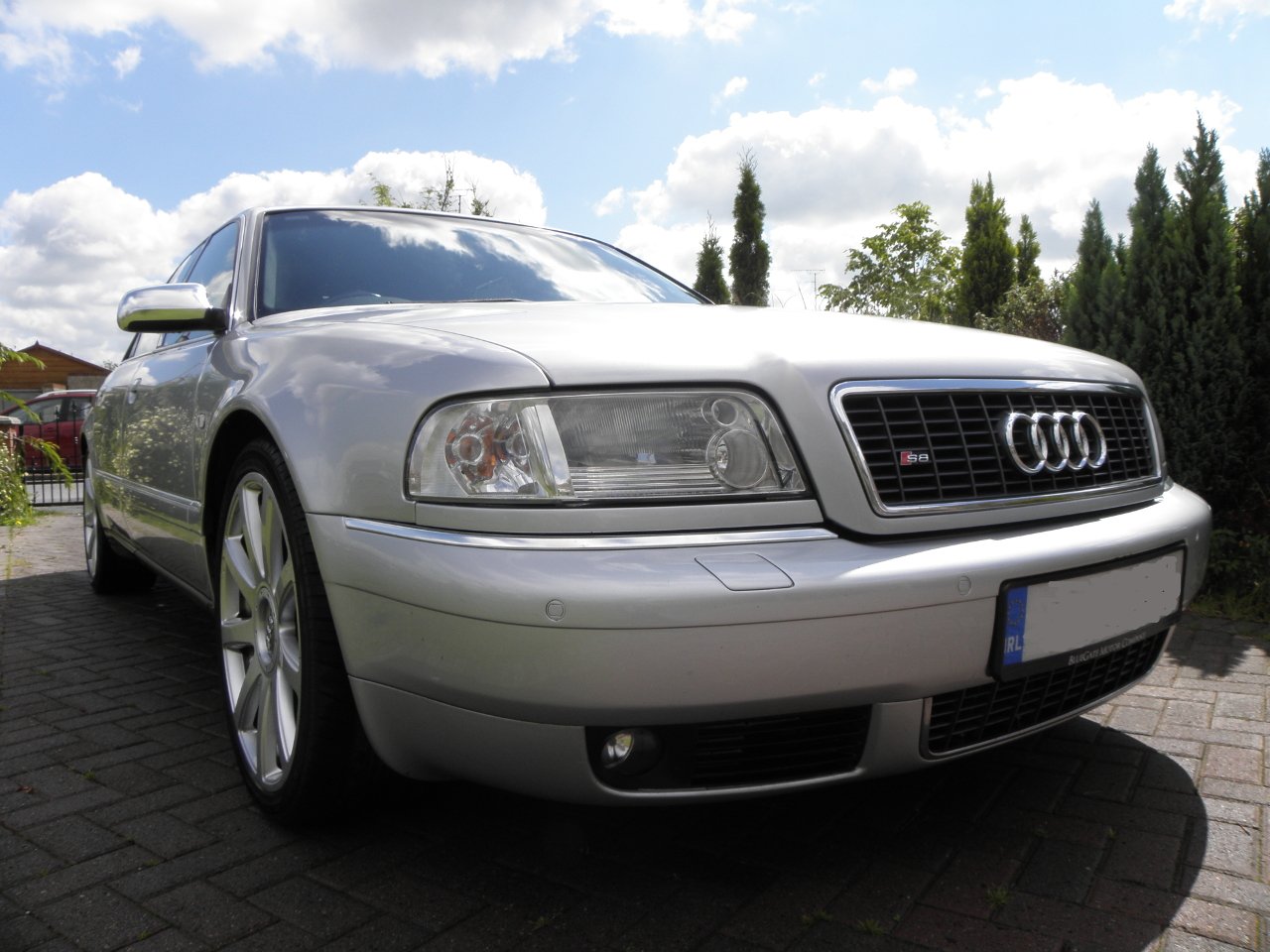 This generation of the S8 was propelled by the most powerful production engine Audi had ever made at that time.  Coupled with stable high speed balance, and this is one superfast saloon.

The Audi S8 – the only V8 and one of the fastest saloon cars I’ve ever owned.  Also the one that was the most followed by undercover law enforcement, for nothing that I ever did.  I suspect these cars might have a following amongst the criminal fraternity due to their space and speed – if you haven’t seen Ronin, go watch it and you’ll see what I mean.

Life with an Audi S8

The acceleration is quick and the V8 noise is what you’d hope for, but as a follow up car to my 350Z, it had a lot to live up to in the driving appeal and handling stakes.  Looking at the specs table below and comparing it to the 350Z specs, I can understand why it wasn’t quite the machine I was hoping it would be.

The acceleration figures quoted below show that is slightly faster to  arrive at the magic 60mph barrier from rest than my previous car, the Nissan 350Z.  However, the figures also show that the V8 engine has a lot more torque delivered earlier, and that lines up with the driving experience.  Off the line this car felt as quick as a 350Z, but in the mid range this car was pure rocketship.  Of course, being a big stable car, it never seems to feel as fast as it is actually going, which is something to watch out for.

All quattro-driven Audis have a tendency to understeer.  This was a big surprise to me when I first encountered it in an Audi S4 and an Audi S6.  I expected this particular Quattro, a 2001 S8, to not have that issue, but I was wrong.  Pushed very fast into a corner, it ran wide every time, so a warning to those of you looking at this generation of Quattro system – be wary.  99% of the time this car handled amazingly well for its sheer size and bulk, but very fast corners need to be taken with care.

Other than fast cornering, the handling was confidence inspiring and quite sublime with the air suspension and the (non-standard) 20″ wheels.  Road noise was minimal as you’d expect from a luxo-barge, and the interior space was palatial.  Plenty of legroom for everyone, plenty of toys such as cruise control, a tv system in the dashboard, leather heated seats, a sunroof and a brilliant sound system kept everyone comfortable and entertained, with  enough space in the boot to park a Ford Ka.  This was a luxury cruiser built to eat up long distances rapidly with ease, as long as there were plenty of places to stop and refuel.

This S8 was the biggest engined car I’ve ever owned.  Being a 4.2 V8 producing 360bhp, mated to an automatic transmission and quattro driven, it was also the thirstiest, and I was lucky to see 20mpg at any stage from a tank.  Later S8s benefitted from having Lamborghini engines, but this first generation, codenamed D2, had a pure Audi engine.  At the time of production, this was the most powerful engine every produced by Audi.

A word about the transmission – it was quick at changing gear when pushing on, but I never felt like I truly engaged with the box.  The manual override option was clumsy as I didn’t have the optional paddle shifters on mine, which would have improved life enormously.

Did the 4 wheel drive ever prove its worth?  Well, yes in that the car was  amazingly stable at normal and very high speed, but it has to be pointed out that everything this car could do, my 350Z was able to do too.  In    fact, the 350Z was also better at being a fast car around a racetrack during a trackday event despite being 100bhp shy on the 4.2 V8.    The only attribute that this car had over the 350Z was interior space – the S8 really is enormous inside.

Maintenance is not cheap either.  Apart from the 20″ tyres that my car was running when I bought it, the Haldex system running the Quattro drivetrain needs servicing too, there’s a timing belt that you cannot forget about, and dealer servicing isn’t cheap.  This is a V8 engine after all, with more valves, cylinders and spark plugs that your usual run of the mill car.  If can find an independent specialist who understands Quattros and their foibles, then you won’t go wrong (you’ll just run out of money slower!).

My growing family left me with an ongoing space issue with the 350Z – I couldn’t fit both kids when I wanted to bring them out somewhere.  But there was no way I was compromising power and performance – I wanted a car at least as fast as the 350Z, but with space for everyone.

And the shortlist this time was really short – a 2004 Mercedes E55 AMG, a 2001 Audi S8, and that was all I could find at sensible money that could hold up against the 350Z.  I drove the E55 and really liked that car – kept it for a few days on test and put plenty of miles on it, but the complete inability to drive it slowly and sedately ruled it out.  On the test drive I spun the wheels in every gear up to 4th – its 450 horses under the bonnet always wanted to gallop whenever an opportunity arose, and I was worried that tyre replacement and fuel bills would cripple me.  So I bought the sensible car instead … well, more sensible than the E55!

However, after 18 months, I got rid of the Audi S8 as it was just as unaffordable to run as the E55 would have been.  Enjoyable while I had it, this was definitely a very fast car, with lots of room and a V8 engine.  Every petrolhead needs to own a V8 engine at least once!