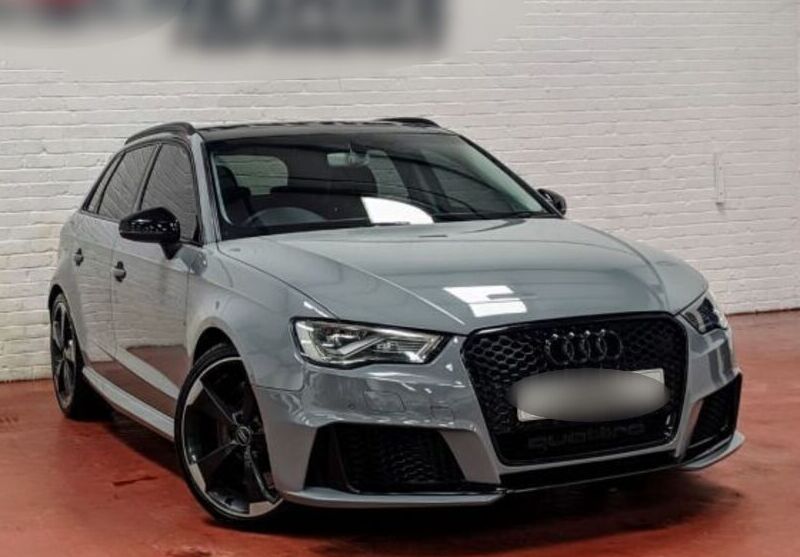 After I had my gas guzzling Audi S8, I needed something that, while quick and fun to drive, had to be a lot cheaper to run.  Being a fan of fast Audis, I bought an old Audi S3 but was never really blown away by its driving characteristics.  The interior had great seats and a nice driving position, but the car never really behaved the way I wanted a 200bhp+ car to behave, so it was only in my ownership for about 6 months.

However, I’m still a fan of the hot hatch genre and would like to put a hot hatch back on the road as a companion to the XF.  And I see two examples of the 2015 Audi RS3 for sale currently.

The 2015 version was the second generation of the RS3.  It deploys 362bhp and 450nM of torque, resulting in a 4.3 second 0-60 dash.  By any standards that is a fast car and definitely has my attention.  But the question I want to know is – how does it handle?  Having owned multiple fast Audis over the years that had different versions of the famed Quattro system, I’m eager to discover the characteristics of the later Quattro setup to see if it is better than what I had.

(In case you’ve forgotten, fans, the best version of the Quattro system was in a 2002 Audi TT 225.  This car cornered hard like it was on rails and never gave me any worry about understeer or last minute surprises.  My 2003 S3 I referred to above never gave me that sense of confidence at speed).

This version of the Audi RS3 is a totally different animal to the S3 I had.  While it has a four wheel drive system, this generation of the Quattro brand has moved on in leaps and bounds.  It effortlessly routes the power to the wheels that have the traction to use it, even to the point where it can be a 100% rear-wheel driven machine.  However, the proof will definitely be in the pudding as I’ve read two different reviews that say opposing things about the handling – one says the car stays planted at any speed while the other says that this RS3 suffers from exactly what my old S3 did, which is understeer at speed.  I need to drive one of these before I can really take a view on this … the Audi Drive Select function that alters the electric power steering, throttle response, transmission shifts and (if fitted) the adaptive suspension settings is something I’m looking forward to playing with.

As for the gearbox, the transmission is now an automated twin clutch 7 speed transmission with paddle shifters.  I’m very much lined up alongside the approach of a twin clutch box with paddle shifters, but I wonder if 7 cogs are enough?  Again, I need to test and then I’ll decide.   Interestingly, this box is not setup to automatically change up when it hits the rev limiter.  Instead, in manual mode, it holds the gear.

What about the engine?  Well, this powerplant is also found in the TT RS and the RS Q3 but with more oomph.  This 5 cylinder 2.5 turbocharged version was Audi’s most potent 5 cylinder engine on the market at the time and actually left  the equivalent RS4 and RS5 in its wake.  Brilliant, but it needs to be good around the twisty stuff too, which is something I need to try for myself.

As with a lot of high performance cars now, the RS3 has adopted electric power steering (electromechanical system).  I’ve no real issue with this as I feel each system needs to be driven to see if it suits the car.

As for the interior, I still think Audi makes the best interiors in the business.  Or, I do when it comes to all other cars except the A3 range.  These interiors over the years always appeared to be the budget line of interiors from Audi and this generation is no different.  The RS3 gives us upgraded seats but the dashboard is uninspiring and seems a little bare in my opinion.  A car costing €50,000 for a 2016 model should have a few more bells and whistles.

Not convinced I’d buy one – but I’ll certainly test it!