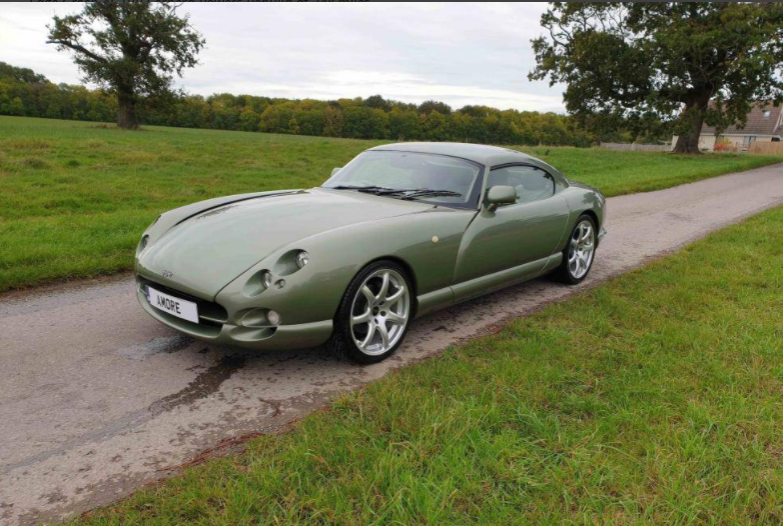 Between 1996 and 2003 TVR channeled the guard dog Cerberus to the underworld, according to Greek legend, by offering the Cerbera for sale.  It was the first 2+2 offered by TVR and also the first car to use TVR’s own engine range.  Note that TVR actually refer to their 2+2 solution as a 3+1 solution where the passenger seat slides further forward than the driver seat to give better legroom behind it.

As a rule I find dashboard layouts in TVRs uninspiring and small – see the T350 and the Tuscan Speed Six models for examples of what I mean.   The dashboard in the Cerbera was not along the same lines as the tiny dashboards in these models though – more dials were presented meaning that a bespoke steering wheel was also present in this car.

Facelifted for the 2000 model year, the headlights were changed to resemble the Tuscan while the car went on a diet through the adoption of lighter bodywork.

TVR had always bought V8 engines from Rover, but once BMW bought them out TVR decided to make their own powerplants in case the engine ceased production.  To live up to expectations the engine was designed with a flat plane crank on a 75 degree V8 layout that followed F1 engine design.

The AJP8, as it was designated, produced 360 bhp (268 kW) from a 4.2 litre engine.  This meant that the TVR designed engine was amongst the most powerful normally aspirated engines in production at that time.  The success of this engine lead to TVR designing an inline six engine and put that into the Cerbera too, but the early instances of these engines were unreliable and had to be replaced.