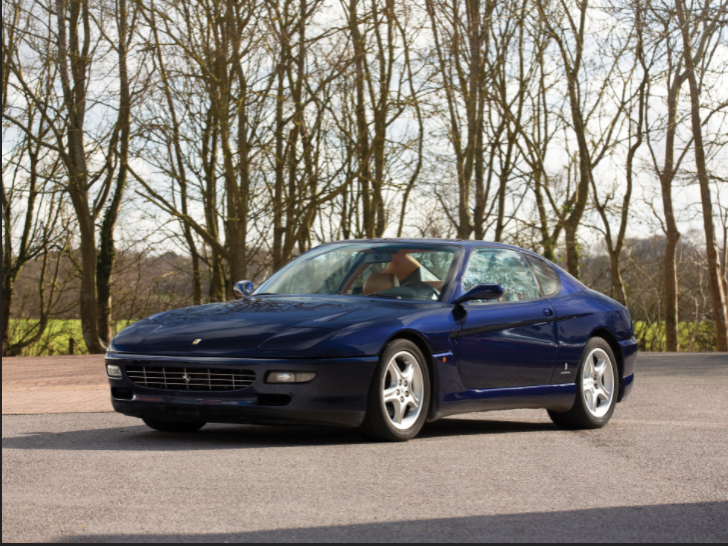 Announced in 1992 on the 40th anniversary of the Belgian concessionaire at a special reception in the Palais de Cinquantenaire in the heart of Brussels, the 456 replaced the 412 and marked a return to the V12 2+2 layout.  The 456 was also the last Ferrari model to incorporate pop-up headlights in its design – such a pity, I always thought pop-up lights were cool.

Internally codenamed the Type F116, the car was design by Pininfarina and initially launched with a 6 speed manual transmission.  The V12 engine fitted to the 456, known as the 116B, was not along the same conventional design as used in the 412 and the Daytona but instead was derived from the V6 fitted to the Dino.  This resulted in a wider 65 degree angle between the cylinder banks, was bored out to 5474 cc and reportedly offered 436bhp from its 4 valve per cylinder setup utilising Bosch Motronic engine management.  (At the time, this meant the 456 was the most powerful production road car for regular use that Ferrari had ever sold).

This 116B engine proved to be extremely reliable, mainly due to not being stressed to deliver such power figures.  In fact, this engine proved so reliable that it became the basis on which engines were drawn up for the 550 Maranello.  The transmission took the approach of the Daytona and was mounted as a single unit with the differential and and final drive assembly (ie a transaxle).

Pininfarina created a tubular-steel space-frame chassis to house the aluminium body panels and composite bonnet and were actually responsible for the manufacturing of the bodies until 1996, when Ferrari took production back in-house.  As the welding together of different metal can cause corrosion (look at the rear of the aluminium-bodied Jaguar XJ6 models around 2004 where the metal rivets meet the aluminium bodywork!), Pininfarina came up with a material they called Feran which was used as a filler between the different elements.

The 456 was quite advanced with it came to drivability.  The car as standard came with power steering and four wheel  ventilated anti-skid disc brakes.  The driver could also take control of the shock absorbers with the abilty to adjust the settings electronically while the rear suspension had the ability to self-level.  This car also had active aerodynamic aids in the form an electronically activated spoiler that changed angle as roadspeed increased, thereby providing additional downforce.

In 1998 Ferrari unveiled an facelifted 456 model, the 456 Modificata or 456M.  This update introduced a smaller front grille, a carbon fibre bonnet (which at the time was the first time this material had been used commercially) and removed the use of the motorised spoiler from the earlier model (booo!).  The interior lost some of its dashboard gauges, replaced the Sony unit with a new Becker stereo and moved it in front of the gear shift to be easier to reach and offered upgraded seats.  While the power remained the same, the car proved to be a smoother drive thanks to a new firing order for the cylinders.

30 special edition models called the 456M GT Schumacher Edition were offered for sale, 10 using the 6-speed manual transmission and 20 using the 4 speed automatic shifter.  This car was based on Schumacher’s own 456M GT and from there customers could specify their own updates.  This resulted in some very individual versions and were officially called 456M GT/GTA Scaglietti.