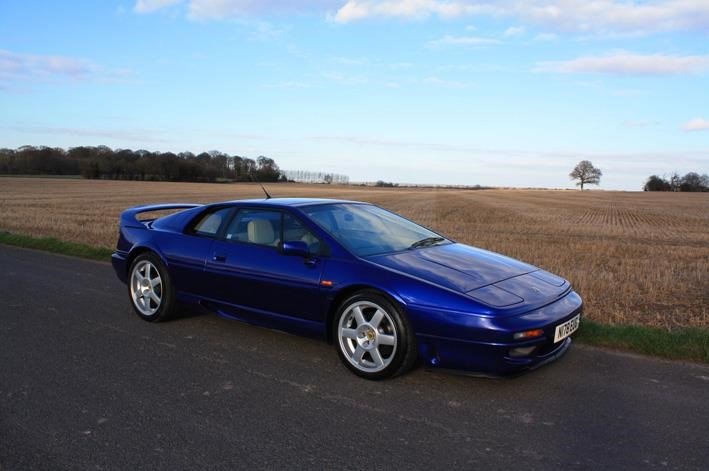 Colin Chapman, the Lotus boss, saw an opportunity in 1980 to move the Lotus road-car range upmarket with the introduction of the Esprit Turbo.  This was a logical step after his initial moves in 1974 with the launch of the Eclat and the Esprit launch in 1975 (replacing the Elan and the Europa).

1970 saw Lotus undertake the M70 project, later to become the Esprit and first unveiled to the public at the Turin Motor Show in 1972.  The initial shape presented at that stage, designed by Giugiaro, was further refined after that show until the final design was signed off in 1973.

The 1977 Bond movie called The Spy Who Loved Me put this car on the map thanks to some clever thinking by Chapman.  Hearing that the movie was being shot in Pinewood Studios, he drove a production model of the Esprit S1 there and parked it conspicuously in the car park where it caught the eye of the producers.  Good move!

The mid-engined approach of the Esprit meant that the cockpit was not able to fit four passengers while the rear visibility was compromised.

Lotus employed an engine of their own design, the Type 907, which was a DOHC 16v inline four cylinder powerplant producing 155bhp.  Citroen supplied the five speed transmission designed for the SM that turned out to be the most reliable component on the car, as the Esprit quickly gained a reputation for being troublesome (over the years, people have referred to Lotus cars as standing for Lots Of Trouble, Usually Serious).

1978 brought minor cosmetic upgrades coupled with higher torque from an upgraded camshaft.  Externally, the car gained new intakes and cooling ducts behind the rear quarter windows and a front integrated spoiler.  Rear lights were updated to the units from the Rover SD1 and new Lotus Speedline alloys were fitted.

Internally the dashboard and gauges were replaced with a new design – many switches disappointingly being sourced from the Morris Marina – while more comfortable seats were installed.  Mechanically, apart from the new camshaft, the battery was moved to the rear of the car.

To celebrate victory in the 1978 F1 World Championship, Lotus released the Commerative Edition Esprit.  Unfortunately the only special features of this model were the paintwork as they were painted in the black and gold livery that the Lotus F1 cars utilised.  It is commonly thought that under 150 of these were made, despite Lotus’ records stating a higher number.

Launched in 1980 with a show car that was presented in the colours of their Grand Prix sponsor Essex, this car adopted turbocharging as an alternative to the V8 idea that had been planned.  The engine from the Talbot Sunbeam-Lotus  project was strengthened to cope with the Garrett AiResearch T3 turbo that was bolted on.  Top speed jumped to 152 mph (245km/h) from the measly 135 mph (218km/h) that the normally aspirated model achieved as a result of a 35% increase in power to 210bhp.  The car had legitimate supercar claims with the 0-60 sprint taking 5.6 seconds, while its handling simply outclassed everything else.

Bodywork was also updated for this model with a full width front spoiler and a rear spoiler denoting the Turbo version.  The chassis and rear suspension were strengthened while a new front suspension was installed.  This version remained on sale until 1987 when a new in-house design replaced both versions.

These models gained a power boost through the use of higher compression, hence the HC in the model name.  Power rose to 215bhp with torque increased to 300nM making this a very potent drivers car.

The new design for the Esprit, designed by Peter Stephens, basically smoothed out the sharp edges in Giugiaro’s original design.  The bumpers were integrated and the interior was altered to give more space to the occupants..

The normally aspirated version was dropped as the fuel injected models gained a power jump to produce 231bhp.  The SE (Special Equipment) version was introduced, which used a higher boost pressure coupled with an intercooler to generate 268bhp.  This version sported a rear wing instead of a spoiler, side skirts and five air ducts in the front air dam and in 1994 became known as the S4.

The Birmingham Motor Show hosted the launch of the Sport 300 – an Esprit with a bigger Garrett T4 turbo, fatter wheels and stiffer suspension.  It boasted a power output of 302bhp and 389nM of torque, resulting in 0-60 in 4.7 seconds and a top end of 168mph.

The SE version is renamed to the S4.  The facelift launched in 1993 resulted in a smaller rear spoiler mounted halfway along the rear boot lid, new Toyota AE86-sourced rear light clusters, new alloy wheels with a five spoke design, new front and rear bumpers and upgraded side skirts and valence panels.  This car was also fitted with power steering, a first for the Esprit.

The S4S model arrived on the scene in 1994 with a smaller turbo to reduce turbo lag that was an issue with the large turbo used heretofore.   With other mechanical upgrades including a different ECM calibration, modifications to the cylinder heads and enlarged inlet ports the engine now produced a quite satisfactory 300bhp and 393nM of torque, resulting in the 60mph sprint taking only 4.6 seconds.  The S4S also retained the stunning roadholding of the Sport 300 but coupled it with the comfort of the S4 and is the model I’d choose from the entire Esprit range.

With twin Garrett AiResearch T25/60 turbos, 8 cylinders, a flat-plane crankshaft and a thicker single piece input shaft for the transaxle (suggested by Derek Bell who raced for Lotus cars), this version developed 350bhp and sprinted to the magic 60mph figure in 4.4 seconds.  Top speed was pegged at over 175mph.

This version was sold in a GT trim level and a more luxurious SE trim level.

As a last upgrade to the four-cylinder Esprits, Lotus launched the GT3 in 1998.  This car was shipped with the intercooled (Chargecooled in Lotus speak) engine that had been on sale exclusively in Italy up to now and was sold alongside the V8.

Only 50 of these beasts were made.  Power remained at 350bhp but the car was lighter than the standard offerings, thanks to a carbon fibre rear wing mounted on aluminium struts.  Fitted with AP racing brakes, an upgraded ECU and stiffer springs, this car was more hardcore and could achieve a 4.3 second time when sprinting to 60mph.