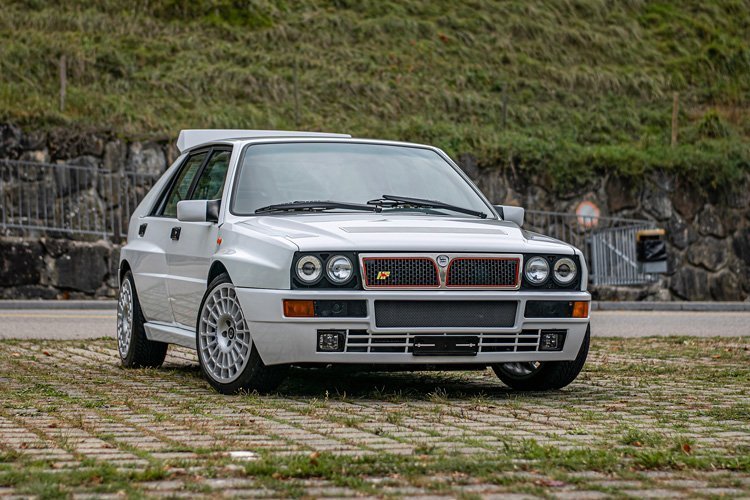 In its time, the Lancia Delta Integrale was one of the fastest cars to travel along a winding road.  This was thanks to its four wheel drive system, inspired by the likes of the Audi Quattro, and its punchy two litre turbo powerplant.

Designed by the legendary Giorgetto Giugiaro and released in 1979, the Tipo 831 Lancia Delta was a front wheel drive small family hatchback dreamed up to fill a gap in Lancia’a current lineup.  It won the European Car of the Yaar award in 1980 and was also sold as the Saab-Lancia 600 in Sweden until 1982.

MacPherson suspension from the Lancia Beta was coupled with SOHC engines based on the powerplant from the Fiat Ritmo.  This Ritmo engine was upgraded with a twin-choke single Weber carburetor coupled to a new inlet manifold, ignition system and exhaust.  In order to differentiate itself from other competitors, Lancia also provided options that were not yet the norm including rack and pinion steering, fully independent suspension and a height adjustable steering wheel while the options list included a split-fold rear seat and air conditioning.  Saab, the cold weather experts, were tasked to assist with the ventilation and heating system and also provided expertise in rust proofing (not a Lancia strong point!) and the bootlid design.

July 1983 saw the introduction of the Delta High Fidelity, or Delta HF as it was known.  This was a front wheel drive 1.6 with a Garrett TBO-225 turbo coupled to a wastegate and breathing through a single twin-choke Weber carburetor.  Further upgrades to the 1.6 engine from the Delta GT added an oil cooler and changed the cylinder heads.

Suspension was retuned, a ZF 5 speed gearbox was dropped in to the mix, various aerodynamic aids were bolted on to the bodywork and the dashboard gained additional digital instrumentation and a leather steering wheel.

The 150 model limited edition HF Martini was unveiled in March 1984 at Geneva to celebrate Lancia’s rally win with the Lancia-Martini 037 Rallye.  It received a special white paint job with a Martini stripe below the door handles and Recaro sports seats.

Introduced to the public in 1986, the HF 4WD was the precursor to the famed Integrale.  The four wheel drive system split the torque 56:44 (front:rear) and used a version of the twin cam turbocharged engine from the Thema i.e.  An overboost function allowed the standard torque figure to increase from 260nM to 284nM for a temporary period while the original MacPherson suspension on the base Delta models was retained in the HF 4WD with the addition of upgraded dampers.

The iconic dashboard from the Integrale started in this model.  The dials were given yellow detailing and a total of eight gauges were presented to the driver.

Group B rallying was banned at the end of 1986, meaning Group A became the WRC forerunner class.  Lancia realised the Delta HF 4WD was the perfect candidate for the homologation rules of 5,000 road cars and was quickly entered, achieving great success.  The Monte Carlo Rally of 1987 was the Delta’s first outing – it claimed first and second place and went on to claim the 1987 WRC Manufacturers Title for Lancia and the Drivers Championship for Juha Kankkunen.  Not a bad start – 1988 started the same way with the first two events falling to the HF 4WD before the Integrale took over.

1988 saw the launch of the cult hero Integrale powered by an 8v inline 4 cylinder 1995cc turbo that produced 185bhp.  This was at a time when the Porsche 911 provided a similar level of performance to the small Lancia – the Delta Integrale covered the 0-60 sprint in 5.7 seconds and topped out at 134mph.  With the Lancia costing less than half the sticker price of the Porsche, this car soon attracted a large following.

Not weighing very much, equipped with four wheel drive and shoving out that much power, this car proved to be a real hoot with its amazing level of traction.  The torque distribution was fixed to a 47:53 ratio (front:rear) in a transmission that featured a torque splitter, epicyclical centre diff, Torsion rear diff and a limited slip viscous coupling.  Suspension was provided by MacPherson struts and lower wishbones in the front and MacPherson struts and transverse rods at the rear .  Grip in the corners was just at another level compared to contemporary challengers.

The engine gained an extra two valves per cylinder, boosting power to the magic 200bhp and dropping the 0-60 sprint time to 5.5 seconds.  Top speed stretched to 137mph.

This variant was announced in 1991 and it brought with it another power boost up to 210bhp and a different bodyshell.  This strengthened bodyshell and wider track provided better levels of traction, resulting in a car that had almost magical levels of grip and drivability.

Not happy that they had completely crushed their competition, Lancia produced the Evo II in 1993 that gave us even more power – 215bhp – but also added creature comforts such as air conditioning.  Bigger 16″wheels and a catalytic converter rounded off the upgrades, with the performance levels remaining unchanged.

Production ceased in November 1994 after 44,296 Integrales had been sold.  With proper room for four people including luggage and performance to trouble supercars, this was a truly amazing machine and remains something I would dearly love to drive some day.