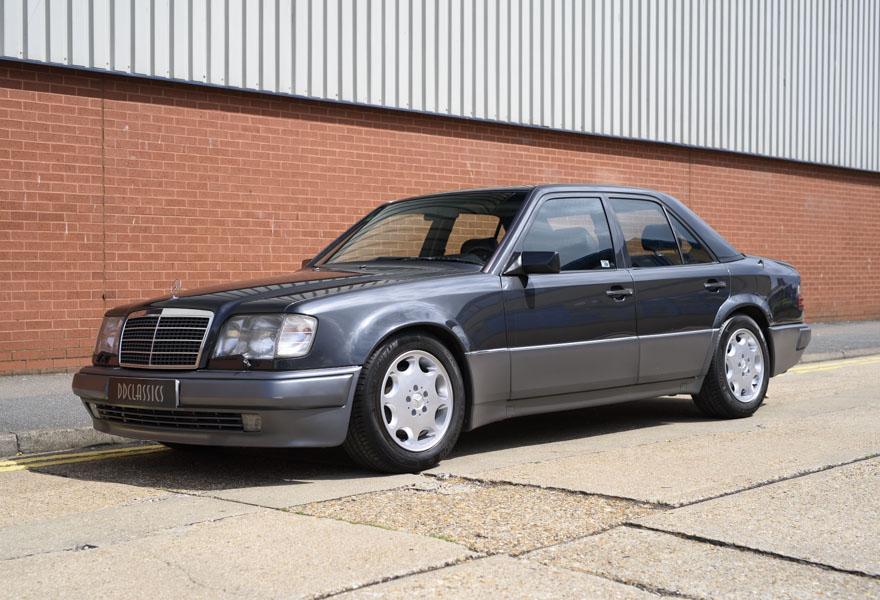 The Mercedes 500E.  Looks like a bog standard Mercedes, unless you know what you’re looking at.  This in reality is a Porsche wearing a Mercedes badge.

The 80s/90s transition period saw Germany in a recession, which of course meant that high performance car manufacturers like Porsche were not selling as many cars as they would like.  To try and stay afloat, Porsche management reached out to other car makers looking for projects they could help with.

And they struck gold with Mercedes.  Long known as a high volume manufacturer, Mercedes had dreamed up the idea of a high powered super-saloon with V8 power, but were having trouble getting this project off the ground.

The 500E was assembled between Porsche’s Rossle Bau in Zuffenhausen and the Mercedes plant in Sindelfingen.  Firstly, the W124 chassis was strengthened and the suspension was replaced, lowering the car by an inch and replacing the rear setup with a hydraulic self-leveling solution.  The resultant car was then sent back to Mercedes for painting and the fitting of the dashboard and other interior components.  After that they were returned to Porsche for the installation of drivetrain components.  Also, four Recaro Sportline seats were adopted, bigger brakes were installed and a subtle bodykit was added.  All these changes took place in the Porsche factory where the car was basically built by hand as the new body with wider wheel arches could not actually fit on the regular W124 production line!

Once the cars had progressed down the Porsche production line, they were returned to Mercedes again for final signoff and delivery preparation.  Apparently, this entire process took 18 days per car, with a build rate of between eight and twelve cars per day.  On a side note, the Porsche factory where the 500E was constructed was also responsible for the Porsche 959 and went on after the Mercedes to build the Audi RS2 – impressive factory!

The 500E that was born out of this process was nothing short of stunning.  The V8 from the 500SL had been identified as the donor powerplant, and this 5.0 litre aluminium V8 with 4 valves per cylinder was tuned to produce 322bhp and 354lb-ft of torque.  This large saloon car suddenly sprinted to 60mph in under 6 seconds, covered the quarter mile in 14 seconds and topped out at around 160mph.