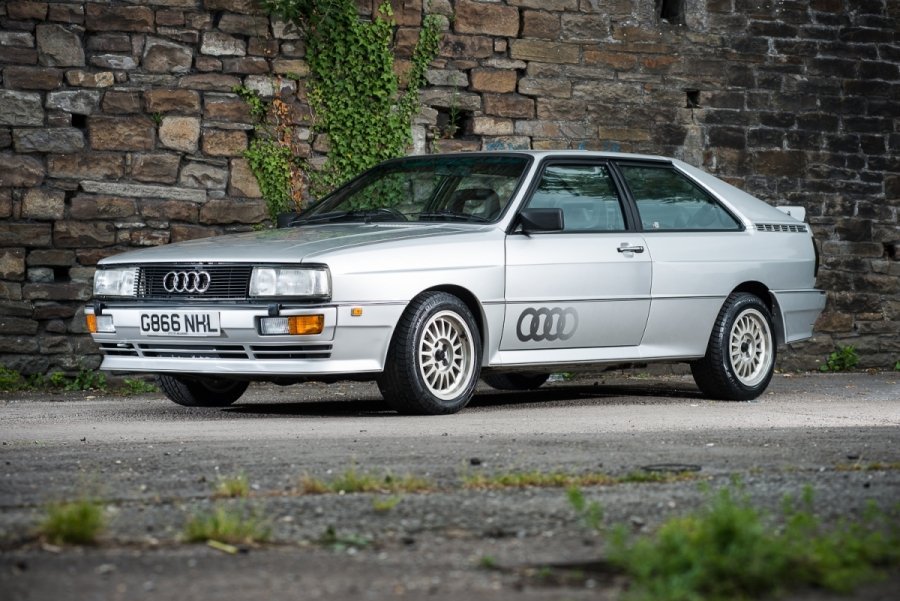 1980 at the Geneva Motor show, Audi turned the automotive world on its head with the unveiling of the Audi Quattro.  Available originally in left hand drive only, the original (ur) Quattro had a 2144c turbocharged 5 cylinder engine punching out 200 bhp and using a simple electromagnetic system of differentials to drive all four wheels.  With all round independent suspension, the car could cover the 60mph sprint in 7 seconds and dominated rallying completely when it started to compete.

The Audi Quattro was unveiled at the Geneva Motor show and was at that time the first production car to couple a four wheel drive system with a turbo-charged engine mounted in the front of the car.

The car went on sale in the UK.

This year brought the introduction of a Bosch ABS system, 15″ alloy wheels, uprated springs and dampers and the inclusion of the talking digital dashboard.

Audi introduced a facelifted Quattro to the market.  The external design was updated and the engine was replaced with a 2226cc version sporting a smaller turbo.  This combination provided the same horsepower but eliminated turbo lag – larger turbos always take longer to spin up.  The talking dash lost its voice, a new steering wheel and centre console was added and the four wheel drive system dumped the basic differential arrangement that split half the power to the front and half to the rear regardless of where the grip was, replacing it with a torque sensing diff.  This Torsen system could detect where the grip was underneath the car and direct up to 75% of the available engine power to the axle that had the most grip.

The dashboard was again given a minor update, where the switches changed and the diff lock pull knob was replaced with a two position knob.  A voltmeter and oil temperature gauges were also added.

The green LCD dash was replaced with an orange LCD display.

The Quattro 20v was put on sale.  This car had a 20v cylinder head that punched out 220bhp and was equipped with a far more luxurious interior.  This car remained on offer until the production run ended in 1991.

1984 also saw the limited (200 cars) production run of Sport Quattro models.  This Group B monster had a short wheelbase and an engine punching out 306bhp.  It is estimated 20 of these cars ended up in the UK and Irish markets, making them a rare beast indeed.