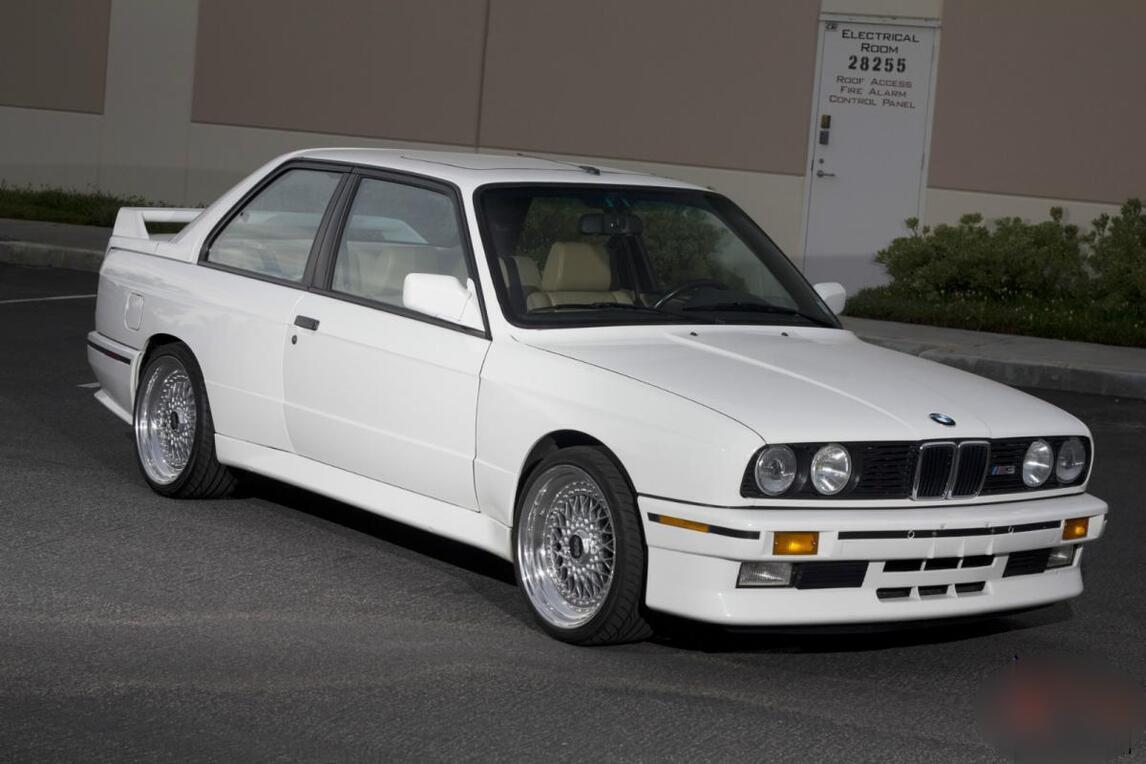 July 1976 saw BMW begin to develop the second generation of the 3 series, internally codenamed the E30 and intended to replace the E21 series.  The final design was signed off in 1978 and the car was launched onto the market in November 1982.  Improvements over the E21, apart from the obvious external styling differences, included a revised suspension layout to cure the E21’s wayward oversteer.  This generation was a resounding success, remaining on sale until 1994.

This was the first 3 series to introduce an M3 model.  Introduced in March 1986 and developed by BMW’s own in-house BMW M GmbH motorsport division,  the M3 was powered by the BMW S14 four cylinder engine.  This engine and chassis combination also resulted in the BMW Z1.

Available as a coupé and quickly followed by a convertible version, the M3 E30 was available until June 1991 and sold just under 18,000 models.  The introduction of a front spoiler, rear apron and side sills improved aerodynamic efficiency, while a flat rear window, plastic bootlid and a glued in windscreen assisted with lower lift forces in the rear of the car and better straight line stability.  It should be noted that while the M3 and regular E30 3-series models may look similar, in fact the M3 externally only shared the bonnet, roof panel and sunroof with the rest of the range.  Internally the M3 was also quite different with the door inner panels being the only shared component.

BMW’s own S14 engine powered the E30 M3.  This engine was a four cylinder DOHC high-revving unit that initially provided 192bhp or 197bhp, depending on whether a catalytic converted was fitted.

Getrag supplied their 265 designated 5 speed manual gearbox.  As European drivers were considered to be sportier than their American cousins, all European models were supplied with a close ratio box set in a dogleg pattern while North American M3s shipped with a standard shift pattern, a standard ratio box and overdrive on 5th.  Both markets were equipped with a limited slip differential.

The M3 had the following suspension differences to the standard range –

This variant was launched in 1988 with 220bhp, larger 16″ wheels, thinner glass in the rear and side windows, a lighter bootlid with rear spoiler and a deeper front splitter.  Also referred to as the EVO2, 505 cars were made.

Available only in France, the Tour de Corse variant was an Evolution model in all but name.  40 cars were sold.

Also known as the EVO3, 600 Sport Evolution variants were manufactured.  This model had an upgraded 2.5 litre engine punching out 235bhp @ 7000rpm, thereby allowing a higher max speed of 250km/h (155mph).  Other upgrades on this model were enlarged front bumper openings, an adjustable front splitter and rear wing, and the replacement of the front foglights with cooling ducts.

These editions were named after highly successful DTM racing drivers and were sold from April 1989.  Power was increased to 212bhp with a catalytic converter added.

Of the 480 Cecotto editions, 80 were destined for Switzerland and were de-tuned to 208bhp to meet emissions limits.  As this is only a loss of 4 bhp, I’d still be happy with one!

(2007) Automobile Magazine named the E30 M3 in their 5 greatest drivers cars of all time.