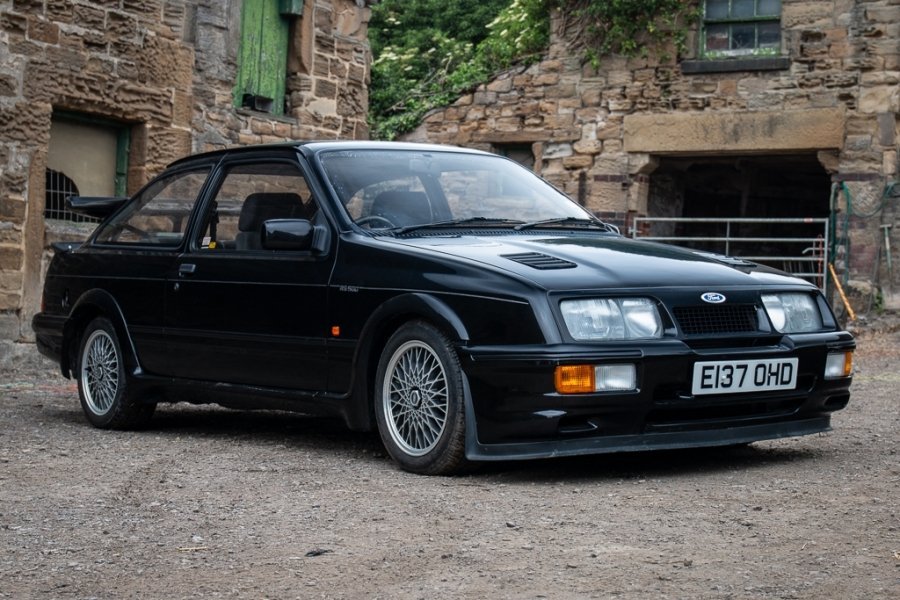 As with a lot of the best cars in Ford’s history (like the Shelby Mustang and the GT40), the Sierra Cosworth was born out of a recognised need to be competitive in motor racing.  Reaching out to Cosworth for assistance, Ford senior management were presented with an option to solve this problem that would utilise the Cosworth YAA engine – an engine based on the T88 Ford Pinto block.

Stuart Turner, Ford’s new Head of Motorsport who spearheaded this project in 1983, realised this was the answer to the powerplant question for his racing car and struck a deal with Cosworth to produce a turbocharged version of this engine.  Turner wanted 180bhp on the road and 300bhp on the track, but Cosworth had a reputation and a financial bottom line to uphold, so they countered with a road version of what became known as the YBB engine that would produce not less than 204bhp in a total run of 15,000 engines.  Ford had planned a limited run of 5,000 models, but when this deal was agreed the seeds were sown for the Sierra Sapphire RS Cosworth (to use up the excess engine supply).  The Borg-Warner T5 transmission from Ford’s own Mustang was selected as it was thought capable of handling this engine, but when that proved not the case, Borg-Warner created a new production line dedicated to Sierra RS Cosworth gearboxes only.

Having decided upon the Ford Sierra as the model line to benefit from this engine, a prototype was presented to the project sponsors in Ford management.  Extensive wind tunnel testing and circuit runs on Nardo had resulted in bodywork modifications that raised questions – the large rear wing raised eyebrows while the gap in the grille between the headlamps was universally disliked.

Lothar Pinske, the man responsible for the Sierra design, stuck to his approach.  He argued, successfully, that the rear wing was required to counter the aerodynamic lift that the teardrop body shape of the Sierra suffered from at high speed, while the grille opening was responsible for funnelling air to the intercooler.  The wheel extensions also faired in the wider wheels that would be fitted to the race machines.  Pinske won this battle and the engineers started to construct the prototypes.

The 1985 Geneva Motor show was chosen as the launch platform for this new racing monster.  Well received by the public, the car was finally placed on sale in July 1986.  5,545 were manufactured, 500 of which were to become the RS500.

With a limited production run of only 500 cars, a limited market of the UK only and therefore only ever produced in right hand drive, the RS500 is one of the most sought after Cosworth Sierras today.

Launched in July 1987,  two years after the original Sierra Cosworth was presented at Geneva, this car was Ford’s attempt to create an unbeatable racing car.  The factory at Aston Martin Tickford was handed 500 Sierra Cosworths with a brief to make an all-conquering Group A racer, which they did at the rate of 15 cars a day.

Of course, the road going cars could not be prepared to race specification, so the road going RS500 models only delivered 224bhp.  The improvements over the standard Sierra Cosworth were really only to the engine – the Cosworth YBD engine delivered an extra 20bhp through the following upgrades –

Externally, the car could be differentiated from the standard Cossie as follows:

These upgrades resulted in 6.2 seconds to complete the 100km/h sprint, over half a second faster than the original car.  Available mainly in black (white and blue were options) and costing £4,000 more than the standard Sierra Cosworth, they quickly sold out and are eagerly sought by collectors today.