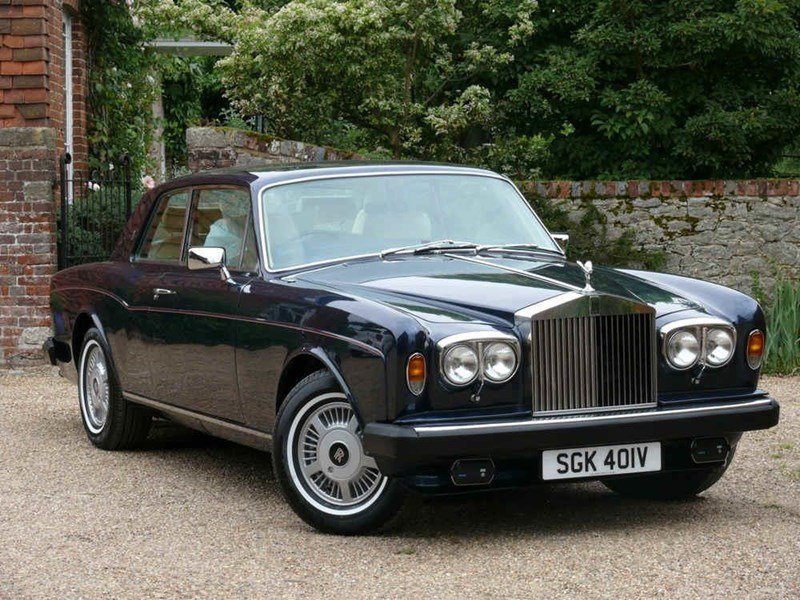 Rolls Royce launched the Corniche name in 1971 when they renamed the two door coupe based on the Shadow that had been on sale since 1966.  Mulliner-Park Ward, a long time Rolls Royce subsidiary, built all the bodies for the coupe and convertible versions, having first learned how to press body panels as this Rolls Royce was the first to feature monocoque body construction.  In case you were wondering, the Corniche name came from a coastal road in southern France where Sir Henry Royce spent many a year.

As it was carrying the Rolls Royce brand, the Corniche range was just as sophisticated as the Rolls Royce saloons.  The interior boasted expensive wood and high quality Connolly leather while the click of the switchgear and the servo assisted gear lever gave an atmosphere of respect and quality that no other car could match.

The 6,750cc V8 engine that Rolls Royce offered in its range at this time was slightly more potent in the Corniche models.  1975 saw the introduction of a single Solex 4-barrel carb, replacing the original Twin SUs and ensuring that the power output was more than adequate, the phrase the Rolls Royce employed when asked what sort of figures the engine produced.  This Solex setup was then replaced in 1977 with Bosch KE/K-Jetronic fuel injection – for those interested in numbers, this new setup produced 237bhp (177kW).

This particular model of Corniche was produced from 1971 until 1982.  1972 saw the front suspension redesigned so that radial tyres could be fitted.  The front track was also widened at this time and the front brake discs were upgraded with ventilated discs.

1977 saw the launch of the Silver Shadow II – the entire range including the Corniche benefited from a rack and pinion steering system, better aerodynamics, an aluminium radiator, different bumpers, improved front suspension, air conditioning and a slightly revised interior.

1979 saw a modified independent suspension fitted on the rear wheels – originally these cars had been fitted with self levelling hydraulic system on all four wheels, but this was dropped from the front setup in 1975.