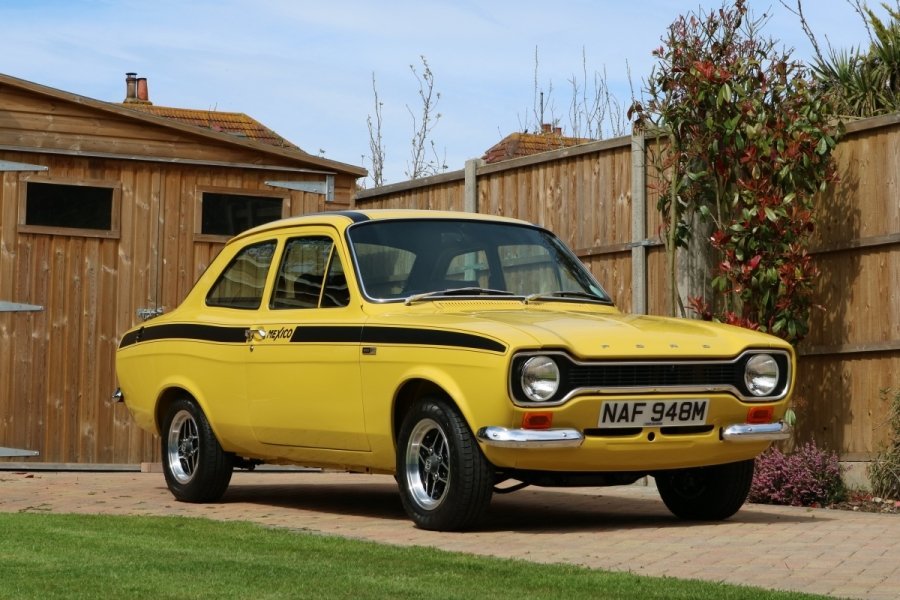 Launched in Ireland and the UK in 1967 and to the rest of the world at the Brussels Motor Show in January 1968, the MkI Ford Escort was an instant runaway sales success with in excess of 177,000 car being sold by the beginning of 1970.  It ran for six generations for the next forty years, with the Mark I shipping 2,000,000 (yes, two million!) cars by the end of its run in June 1974.

Escorts destined for mainland Europe were different from those offered for sale in Ireland and the UK, in that the front suspension and steering gear was set up differently while dual hydraulic circuits were fitted to the braking system.  Models for both markets shared a 4 speed manual or 3 speed automatic transmission powering a rear wheel drive configuration.  MacPherson strut front suspension and a leaf-spring live axle rear suspension setup was linked to rack and pinion steering.

This variant had round front headlights and rubber flooring.

This variant had rectangular front headlights, a water temperature gauge, carpets and a cigarette lighter.

The Escort used the Kent Crossflow engine, sourced from the Pinto sold by Ford USA.  This was available in a 940cc, 1.1 litre and 1.3 litre versions.

The 1300GT version made use of a tuned 1.3 litre version of the Crossflow engine, with a Weber carburetor and better suspension.  The interior was beefed up with an oil pressure gauge, ammeter and a rev counter.  The Sport version used the same engine with flared front wings but without the interior upgrades.  The 1300E version also used this tuned engine and the wheels and flared arches from the Sport, and had a more luxurious interior with a wood trimmed dashboard and door cappings.

The Escort Twin Cam was built for Group 2 International Rallying, with a Lotus-sourced 8 valve twin cam 1.5 litre engine.  Originally developed for the Lotus Elan, this engine powered the Escort to a championship win in 1968 in the British Saloon Car series.

Successful also as rally cars, the Mk I Escorts were unbeatable in the late 1960s and early 1970s with their greatest win being attained in the 1970 London to Mexico World Cup Rally.  Hannu Mikkola and Gunnar Palm’s winning drive prompted Ford to release 10,352 Escort Mexico models, powered by the 1.6 litre crossflow engine and sporting  strengthened bodyshells.

Other models were made before the Mk I was retired in 1974.  The RS1600 used a Cosworth BDA 1.6 litre crossflow engine with a 16v Cosworth cylinder head, while the RS2000 model was less troublesome than the RS1600, using a 2.0 litre OHC Pinto engine.