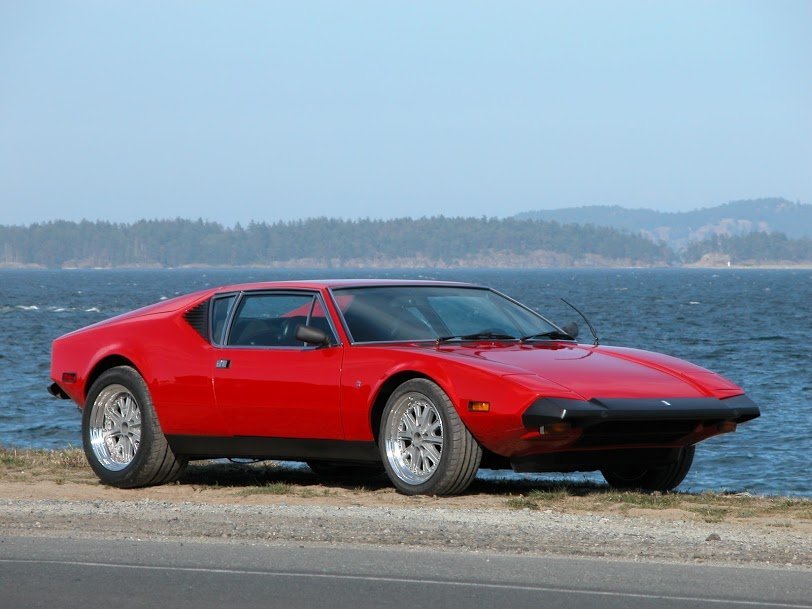 Launched in 1970 at the New York Auto Show, the Pantera was the replacement for DeTomaso’s Mangusta.  While the new car’s chassis was based on that of the Mangusta, the body was an all new design by Tom Tjaarda at Ghia while the engine was a new Ford V8.  DeTomaso had sold Ford on the idea that they could sell the Pantera in the US as a replacement for their GT40 (with DeTomaso retaining sales rights everywhere else).

With Ford on board, the costs of production were lower while the quality of components was higher.  The car was initially available with air conditioning, magnesium wheels and power windows as standard .  Also thanks to the linkup, Ford supplied their 315 cu in (5,763cc) V8 four barrel engine, which was more reliable than other offerings and had the benefit of being serviceable pretty much anywhere.  This engine came in two states of tune – 310bhp in the USA and 330bhp throughout the rest of the world.

To give the car proper handling, the engine was positioned just aft of the driver and ahead of the rear axle, with fully independent suspension all around and the same ZF transaxle used in the Maserati Bora.  This was expected to be quite a competitive setup, but in reality early road testers found the car had a tendency towards early oversteer followed typically by an oversteer-induced spin.  While tyre pressures were known to be critical in taming the handling, this nugget of information was not given to testers nor to customers, and when it was then discovered that not all cars were apparently built to the same quality nor standard with wildly different acceleration times being reported, the market started to move away from the Pantera.

Minimal rustproofing was used in the production of the Pantera.  Ford tried to make claims that they could only produce 2,500 units annually as they were taking extra care in the building of this exotic follow up to the GT40.  Unfortunately this claim made no impact on dismal sales – the cramped and uncomfortable cockpit, the tendency to overheating and its not as expected performance meant that sales never reached the targeted 4,000 units per annum.

In 1971, DeTomaso announced an ambitious racing programme to try and reverse the declining sales trend.  However, this did not go as planned – while the race cars were prepped with 400bhp, the car never made an impact on the racing world with its best finish being a dismal fifth in one Monza 1000km race.

US regulations forced larger bumpers on the Pantera to comply with crash regulations.  With sales never achieving expected targets and looming 1975 US safety regulations forcing a potential total redesign of the car, Ford USA stopped importing the Pantera and pulled the plug on their involvement.  This meant a new engine was needed for sales in the rest of the world – Ford Australia provided the 300bhp answer and production was all moved to Modena.  The Pantera was made there until it eventually exited production in 1994, at which time 7,260 Panteras had been manufactured.

It’s a sad tale – this is one of my personal all time favourites.  Someday, I hope I’ll get the chance to drive one.