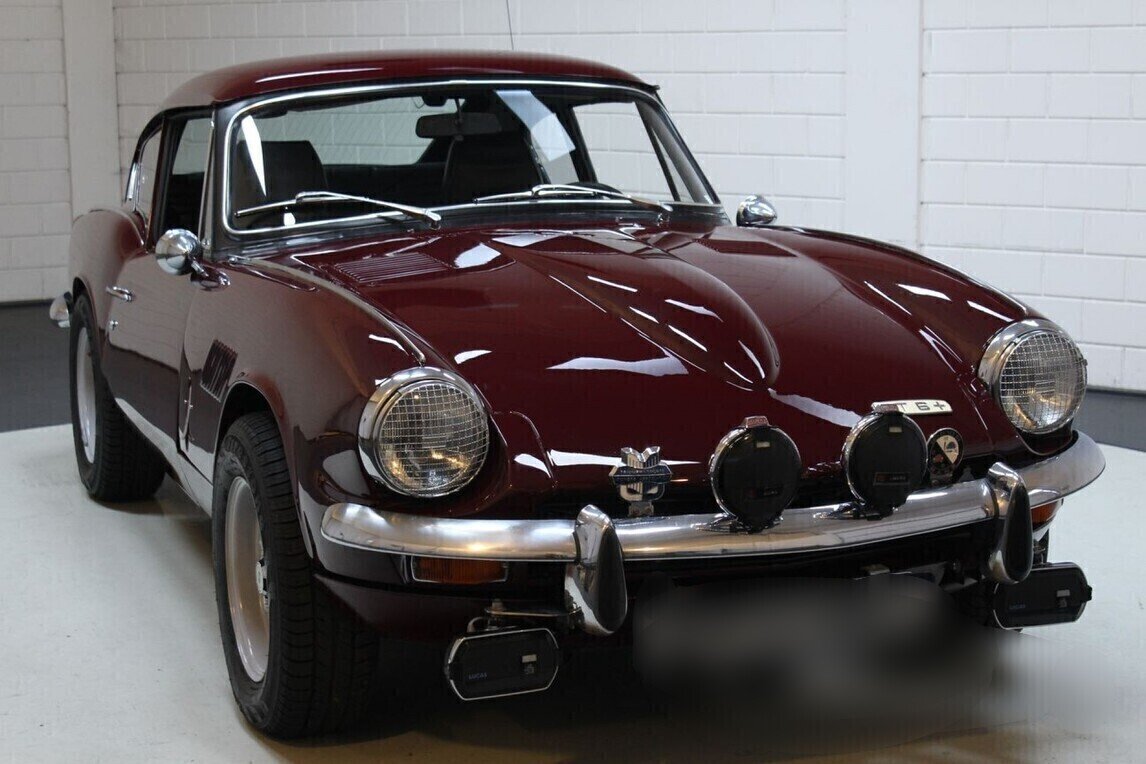 Triumph launched the Spitfire in 1962, to much acclaim.  But the bean counters at Triumph realised that they needed a hardtop version to combat the MG MGB, so in 1963 Giovanni Michelotti was handed a basic Spitfire and asked to come up with a Coupé version.

The resultant styling was deemed a success, but the extra weight of the roof meant that the car was too heavy to use the Spitfire’s 4 cylinder 1147-cc engine.  Triumph squeezed in the 2.0 litre OHV 6 cylinder from the VItesse, resulting in the GT6.

On sale in 1966 with a sleek fastback body incorporating an opening hatchback, better seats than the Spitfire and a power bulge in the bonnet to cater for the bigger engine, the GT6 instantly became known as the poor man’s E-Type.  The engine produced 95bhp and 159 nM of torque which delivered faster acceleration than the MGB – the GT6 could hit 60 mph in 12 seconds.

The additional power running through what was originally a Spitfire drivetrain meant that several mechanical improvements were required – a new radiator mounted further forward (as the engine was much longer), the Spitfire gearbox was replaced with the 4 speed all synchromesh transmission from the VItesse 2.0 Litre (where the engine had come from) and better front springs carried the weight of the heavier engine.

An overdrive offering was optional – while it added 20% overdrive on 3rd and 4th gears, in reality this only added one extra ratio as the addition of overdrive on 3rd gear just matched what 4th gear offered as standard.

Opening quarter light windows were added to the doors while carpets, a heater and additional instruments on a wooden dashboard finished off the upgrades over the Spitfire.  There was an option to order a rear seat, but as in typical 2+2 fashion this was only large enough to fit small children.

The original GT6 sold very well, for several reasons.  It was smoother to drive than the MGB, it was faster than the MGB and it delivered very good fuel economy for the time, at 20mpg.  Unfortunately, the rear suspension had been inherited from the Triumph Herald via the Spitfire on which this was based – this swing-axle design was just unable to deal with the additional power of the GT6 with the rear end tending to break away if the driver lifted off mid corner.  (A personal note here – my Dad owned a Triumph Herald and remembers having to put bags of concrete in the boot to assist with keeping the rear end in line.  If the Herald had breakaway tendencies with much less horsepower through the rear wheels, I’m not surprised the GT6 suffered this in spades.)

1969 saw Triumph solve the handling problem that was especially killing sales in the USA.  The rear suspension was re-engineered to use reversed lower wishbones and Rotoflex driveshaft couplings, revolutionising the handling and turning the GT6 into a much better drivers car than the MGB.

Other updates to the MkII GT6 included a revised front end with side vents in the wings (due to the raising of the front bumper to conform with crash regulations), side vents in the rear pillars and a tuned version of the Vitesse engine that raised output to 104bhp thanks to a new camshaft, manifolds and cylinder heads.  Fuel economy improved, acceleration sped up and the top speed increased to 107mph as a result.

The interior was also revised, with black headlining and a new dashboard offering better ventilation and a two speed heater fan.  The overdrive option on the transmission was still offered as an optional extra that many customers ordered.

In 1970 the entire bodyshell was altered to match the changes applied to the Spitfire MkIV.  These changes included recessed door handles, a smoother design on the front end and a more dramatic cutoff rear end.

Further changes were introduced to the MkIII in 1973, with a brake servo added and the rear suspension replaced with the cheaper swing-spring layout from the MkIV Spitfire.  This new design was an evolution of the swing axle suspension that had been universally panned on the MkI, but in this guise a larger front anti roll bar was added to compensate for the lack of stiffness on cornering.  All this made the car heavier but the performance remained on a par with the MkII thanks to the better aerodynamic design.  Fuel economy improved overall, but this variant of the GT6 never sold as well as the previous generation.  In my opinion, that was down to the step back in suspension design and the introduction of unleaded gasoline which meant compression ratios had to drop for models sold in the USA.

1973 was the last year the GT6 was manufactured, with the last few models finally sold in 1974.