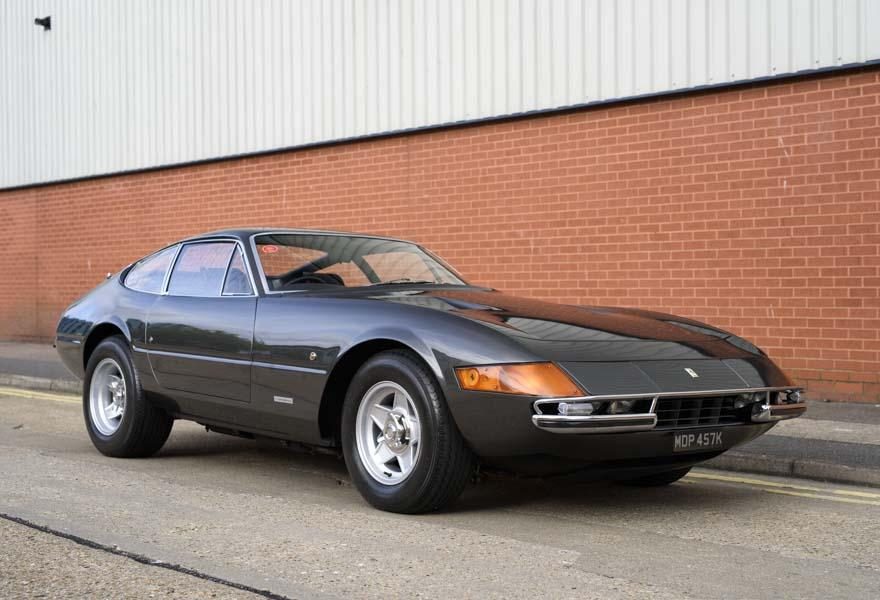 Mainly in response to the Lamborghini Miura, the 365 GTB/4 was launched by Ferrari at the 1968 Paris Motor Show.  An evolution of the 275 GTB/4, this new car boasted a larger 4.3 litre quad cam V12 engine, fuelled by 6 Weber carbs and punching out 350bhp instead of the earlier car’s offering of 300bhp.

The design of the new car had been contracted to Pininfarina – the brief was to rival the Miura in a way that the 275 couldn’t.  Of course, if the new car looked better than the Miura, it needed to be a better car to drive too.  When launched in 1968, Ferrari therefore made sure that it was the most powerful as well as the fastest road car on sale.

Handling is the most important aspect to any good drivers car – a car with huge amounts of power but doesn’t handle very well is not exactly going to appeal to enthusiastic drivers.  Nobody wants to accelerate into a tree.  With this concept in mind, Ferrari ensured that the 365 had handling to match the power output of the engine.  50:50 weight distribution was achieved by mounting the five speed transaxle at the rear of the car to counter the weight of the engine at the front while the steering lightened up at high speeds.  Independent suspension was fitted all around as were ventilated Girling disc brakes.

Ferrari also wanted the car to be luxurious – for a start it was huge, so the interior could be quite spacious and comfortable.  Leather bucket seats, air conditioning, a large boot and electric windows completed the package.

The chassis was made from tubular steel to which a steel body was fixed.  To meet the handling requirements (i.e. to save weight), the bonnet, bootlid and doors were aluminium.  The headlights initially were a quad light offering behind clear plastic lenses, but this was later changed in 1971 to the swivelling pod system that is most familiar.

After just under 1,300 were manufactured, production ceased in 1974 of these fascinating cars.