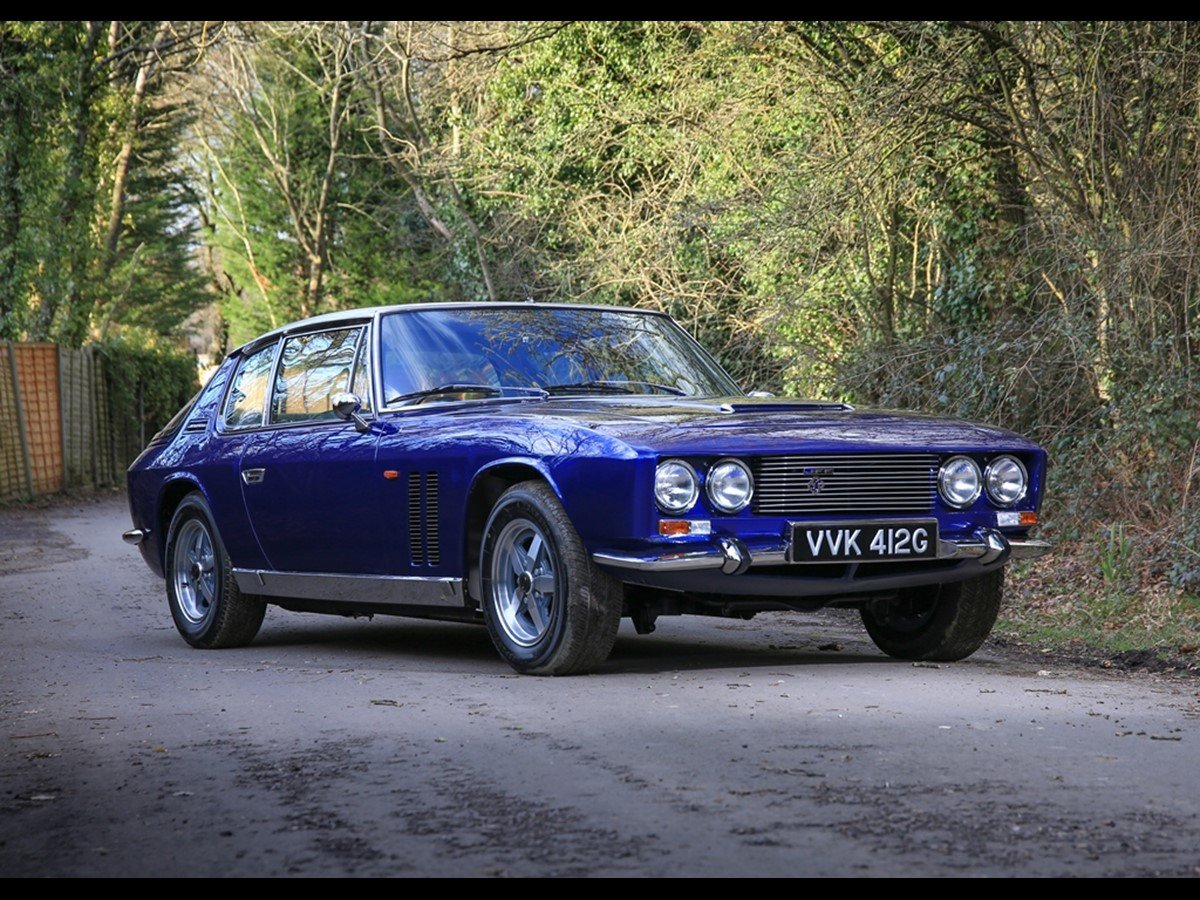 1968 – the year when a production car from a tiny British manufacturer was sold with over 300bhp, anti lock brakes and four wheel drive as standard.  1968!  That was way ahead of its time …

The original Interceptor was launched in 1966 with a distinctive shape created and built by the Vignale company in Italy.  A return to steel bodywork was adopted, which brought a weight disadvantage to it, but Jensen planned to use a Chrysler big block 6,276cc V8 engine punching out 330bhp, so this weight penalty wasn’t that big an issue.

1968 then brought the FF to the party – where FF stood for Ferguson Formula and denoted that the car had a four wheel drive system developed by the Ferguson tractor company.  This variant had a chassis longer than the standard Interceptor to accommodate the four wheel drive system’s torque-splitting centre differential – visually you can differentiate an FF by looking for the two vertical air vents in the front wings.  Power was split 37% to the front wheels and 63% to the rear, with power delivery achieved by splitting the drive behind the 3 speed Torqueflite automatic box and adding a second propshaft to a new front axle.  CV joints were then fitted to the front drive shafts and the front suspension was redesigned in-house with double wishbones on either side of coil springs.

The resultant handling that the FF delivered was far superior to anything on the road heretofore.  When coupled with the Dunlop Maxaret anti-lock braking system, the car was streets ahead technically of any competition.

The anti-lock braking system was far more basic than modern systems, as the computers of the day were neither small enough nor fast enough to be adopted into this sort of usage.  In this design, the system was incorporated into the master diff, on the alert for any differences it could detect between the relative speeds of the front and rear wheels.  When such discrepancies were identified, the system electrically released the brake servo assistance on the locked wheels and then monitored the relative speeds again until the speeds equalised.  Once the relative speeds matched, the brake pressure was re-applied.

1970 brought the MkII Interceptor, which adopted power steering as standard,  a much desired feature on the Interceptor before its introduction.  Visually, the MkII can be distinguished with a revised front grille and bumper and different front and rear light fittings.  The interior was given a substantial revision and air conditioning was an option.

Introduced in 1971, Jensen announced another revision to the front grille, bumper and headlamps.  New alloy wheels (GKN) were offered and air conditioning was fitted as standard instead of being an optional extra.   Finally, the seats were updated.

This version of the Interceptor offered two variants of the 7.2 V8 engine to customers.  The first, lower powered version had a 4-barrel carburetor and produced 305 hp, while the higher power version had three 2-barrel carburetors and produced 330 hp.  This higher powered version was badged as the SP (Six Pack) and only 232 of these models were made during 1971.  Why?  Because in 1972, Chrysler quit production of the higher powered triple carb variant of its 440cu in engine, leaving Jensen without a powerplant for its SP variant, which had to be dropped from the range.

It’s a shame that this car was so expensive when launched, as it was beyond doubt the best car in the world in terms of forward thinking and driver appeal.  Final production numbers today suggest that only 320 FF models were sold – this was for two main reasons.  Firstly, at £5,340 the car was nearly the same price as a new Rolls Royce (£6,670), but secondly the Jensen could never be sold in the United States.  Why not?  Because, due to the location of the transfer case and additional prop shafts, the car could not be manufactured in left hand drive.  Oops!