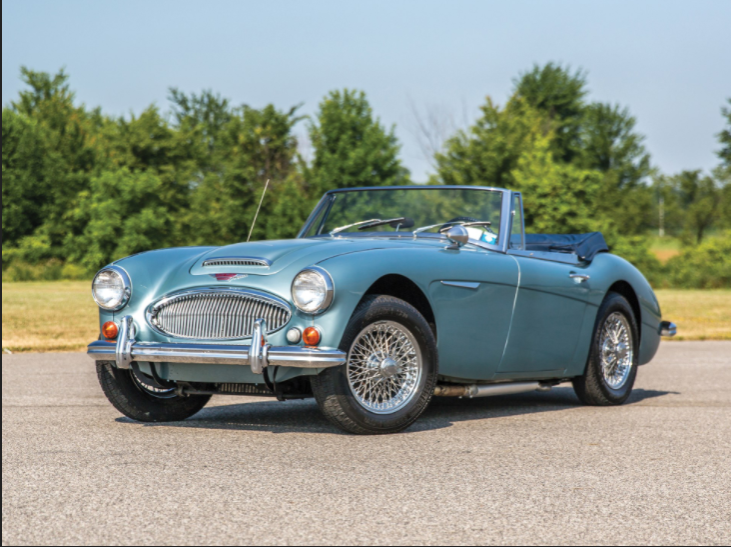 Launched in 1959 and sold until 1967, the “big Healeys” were very successful in their day and are still much sought after by collectors.  It began life as an open 2+2 sports car but had, by the end, become a proper convertible, losing the +2 option which only fit children anyway!

Introduced in 1959, the Austin-Healey 3000 MkI was based on the 100-6,  but replaced the 2.6 litre 6 cylinder 102bhp engine of its predecessor with a new 2912cc BMC C-Series engine running at a higher compression ratio of 9:1 and utilising a pair of SU HD6 carbs.  This allowed the first series of the 3000 to offer 124bhp and 167lb-ft of torque.  Front disc brakes were fitted as standard and the transmission was strengthened to cope with the increased power.

The BN7 was the two seater variant, while the BT7 was the 2+2 option with a detachable hard top.  Both versions were amazingly similar to the 100-6.

In 1961 the MkII hit the markets, with a third SU HS4 carburetor added along with an improved camshaft.  These changes bounced the power output to 132bhp.  A brake servo was offered later in 1961 which really improved the braking characteristics, and the side mounted gear change was moved to a more conventional centrally located gear lever.

Visual changes for this MkII were limited to a vertical bar arrangement on the front grille.

In mid 1962, the decision was taken to drop the 2+2 BT7 variant of the big Healey.  Shortly thereafter, the brand new BJ7 variant was launched to an expectant public.  The car was now a convertible offering only, with a new wrap around windscreen, wind up windows, quarter lights in the doors and a better folding operation for the roof.  A new 60-spoke wire wheel design replaced the 48-spoke offered in previous BN7 guise.

As for the powerplant, Austin-Healey dropped the triple carburetor setup as it was proving tricky to tune for racing.  This new model adopted a pair of SU HS6 carburetors, losing only 1 hp as a result.  Overall, this new variant was a far superior car in terms of both quality and drivability – road tests of the day reckoned it was over 6 seconds faster to the magic 100mph!

1964 brought the BJ8 to the market.  Visually identical to the BJ7, this new offering provided 148 bhp through the use of twin HD8 carbs instead of HS6’s and a new revised camshaft.  The optional brake servo was now fitted as standard.

Internally, the dashboard and interior were completely redesigned in order to remain competitive in the marketplace.  Leather seat upholstery was relegated to the options list, replaced instead with Ambla vinyl.  The rear seats could be folded flat in a nod to the Porsche 356 approach, while the wooden dashboard now housed a more modern black-on-white speedo and rev counter directly in front of the driver.